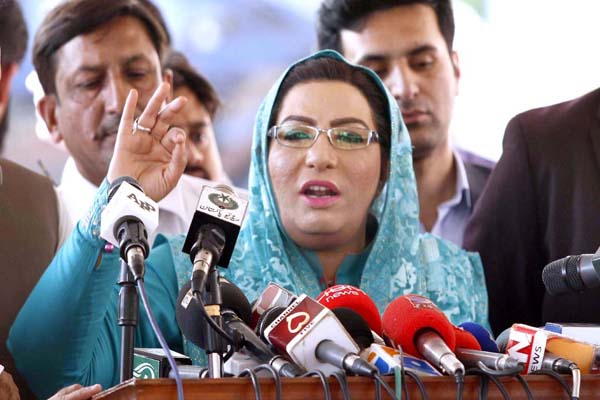 ISLAMABAD, Apr 25 (APP):Special Assistant to Prime Minister for Information and Broadcasting,
Dr. Firdous Ashiq Awan Thursday said Nawaz Sharif’s drama of disease
has reached its climax with his application for treatment abroad.
It has proved beyond any doubt that he wanted to go to London in
order to escape prison, she said.
In a statement, the Special Assistant to PM said that Marriyum
Aurangzeb was spokesperson of the corrupt whose interpretation
and explanation could not hide billions of rupees, recovered from the
account of a “Paaperwala.”
She said it was surprising that Bilawal Bhutto Zardari was
feeling the pain of general public. People were still poor as both
former ruling parties looted the national resources, she added.
She said that lavish lifestyle of opposition leaders belied
their claims of affection with poor and they even did not
know prices of daily use items.
Dr Firdous said it would be ‘miraculous’ if Bilawal could inform
about the prices of daily use items.
She said that flawed policies of PPP and PML- N led to current
poor economic conditions of the country.
She said Bilawal was not worried for the poor, but trying to
befool masses and come to power but people have already
rejected dynastic politics.
The SAPM said if Bilawal was really worried about poverty and
inflation, he should ask his father and aunt to return the looted
national wealth.
She said that Shah Mehmood Qureshi was part of the team of
Prime Minister Imran Khan, and Bilawal Zardari should shun corruption
and become a ‘pupil’ of Shah Mehmood Qureshi.