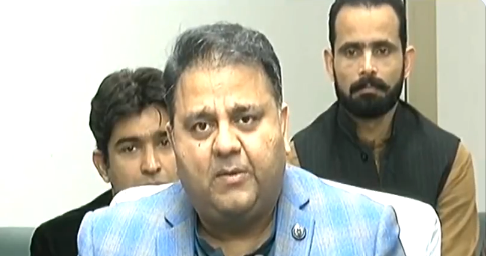 ISLAMABAD, Nov 19 (APP):Federal Minister for Science and Technology Chaudhary Fawad Hussain Tuesday said the government would make all out efforts to earn Rs10 billion during the next few years with the support of bio-technology.

Addressing a press conference here, he said that they have set a target of producing 30 percent cheap electricity from green sources.

He said the future of country was lying in the promotion of solar energy and lithium battery, adding that the solar panels would help in producing electricity at low cost. He said that major reason of inflation in the country was due to production of expensive electricity.

Fawad Chaudhary also shared that Ministry of Science and Technology is all sett to sign an agreement with the Punjab government under which the mega Bio-Technology Park of South Asia will be established.

He also hinted to promote herbal medicines in the Pakistan like developed countries.
“We wanted to manufacture agricultural drones and air ambulances with the help of Pakistan Air Force and other defence institutions,” he remarked.

With the keen interest of prime minister, the budget of science and technology has been increased till 600 percent in current year, he said adding that in next year this number will be reached till 1500 percent.

Talking about the departure of former prime minister Nawaz Sharif to United Kingdom for treatment, he said that prime minister and entire leadership of Pakistan Tehreek-i-Insaf(PTI) wished a good health for him.

He said that in my opinion, Nawaz Sharif would not come back now. Nawaz Sharif has disappointed his workers, he said.
He said the bail of Nawaz Sharif was not a good omen for the supremacy of law and institutions in the country.

Today, he said, the cabinet would decide the future course of the government for filling an application against the Lahore High Court decision regarding Nawaz Sharif’s bail.

He said that time was required to change the entire system of the country, adding that the PTI will do it with public support.

On the occasion, a Memorandum of Understanding was also singed between the Ministry of Science and Technology and Air Lift a private organization.

Under the agreement, the Air Lift will provide Public Bus Transportation Service initially in Karachi and Lahore. After these cities the service will be launched in other cities. These buses would be run on batteries.

Few students of science and technology have collected an amount of Rs12 billion and launched an online Air Bus transportation service like Uber and Careem. He urged the youth to move towards entrepreneurship rather to find jobs.