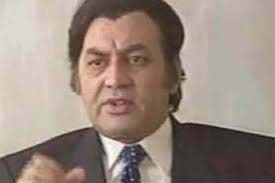 ISLAMABAD, Mar 19 (APP):Renowned film star of Pakistan’s silver screen Muhammad Ali was remembered on his 13th death Anniversary today (Tuesday).
Muhammad Ali was born on April 19, 1931 in Rampur‚ India. His family moved from Rampur to Rohtak after his birth and then to Multan shortly after the independence of Pakistan.
Muhammad Ali joined Radio Pakistan Hyderabad as a broadcaster in 1956. He also worked at radio Pakistan Bahawalpur Karachi stations.
Zulfikar Ali Bukhari‚ the then Director General Radio Pakistan‚ became his mentor for acting. Muhammad Ali used to mention him as his spiritual father.
Later he introduced Muhammad Ali to his friend‚ poet and film producer Fazal Ahmed Kareem Fazli‚ who offered him the role of a hero for his new movie Chiragh Jalta Rraha. But instead of playing the role of hero Ali accepted the role of villain in the movie.
He was known as Shahenshah-e-Jazbaat‚ (The Emperor of Emotions). As a highly versatile actor he performed historical biographical and patriotic roles; in costume and art movies.
Muhammad Ali began his professional career from Radio Pakistan Hyderabad and his debut film was “Charagh Jalta Raha” (1962).
“Shararat” (1964) was another popular film by him. Muhammad Ali performed an unforgettable role in “Aag Ka Darya.”
He acted in over 300 movies including some Punjabi films and worked with Zeba‚ Shamim Ara and other prominent actors and actresses of the time. He was a versatile actor and played negative as well as character actor roles successfully.
He married Zeba‚ a prominent film heroine of her time. Ali was a cardiac patient and underwent two surgeries. He is widely considered to be the foremost dramatic performer that the Pakistani film industry has ever had and was conferred with Pride of Performance in 1984 in recognition of his life-long services to the entertainment industry of Pakistan and subsequently became the only actor who was awarded with Tamgha-e-Imtiaz.
Some of his famous movies include Bahadur‚ Daal Mein Kala‚ Dil Ne Tujhay Maan Liya‚ Shararat ‚ Khandan ‚ Khamosh Raho ‚Clerk ‚ Jan Pehchan ‚ Kaneez ‚ Dil Aur Duniyan ‚ Bobi ‚ Mr. X ‚Tiger Gang ‚ Mere Humsafar ‚ Sher Di ‚ Insan aur Aadmi was ‚ Shirin Farhad ‚Dum Mast Qalander ‚Khamosh raho‚ Aag ka Dariya‚ Wehshi ‚ Aag and Jaise jantey nahin.
Mohammad Ali died on March 19, 2006 due to heart attack in Lahore.