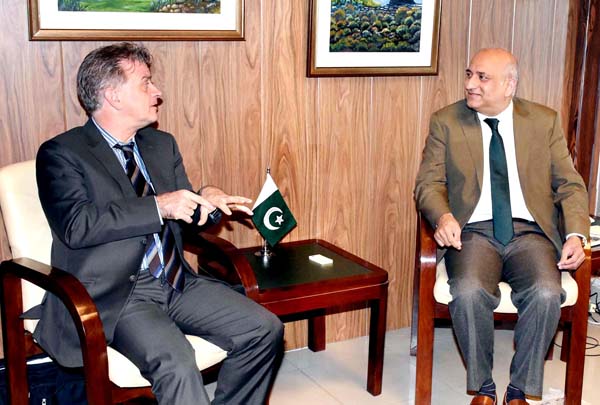 ISLAMABAD, Mar 18 (APP):Director General of Central West Asia Development, Asian Development Bank Werner E Liepach along with his delegation called on Minister of State /Chairman Board of Investment (BOI) Haroon Sharif here at the BOI office.
During the meeting, Haroon Sharif stated, “The Prime Minister Imran Khan is taken a clear leadership role in reviving the economy and making Pakistan lucrative destination for investors, said in press release issued by BOI here on Monday.
Talking about the efforts of the government, Haroon Sharif stated that a number of neighbouring countries were ready to take long-term investment stakes in Pakistan and coming forward with solid projects.
He said the investors have also shown great interest and at least 5 multinational hospitality chains were in negotiations with BOI with their investment plans.
BOI Chairman Haroon Sharif also apprised the Director General, ADB on the areas being focused by the government, including framework for industrial development, development of Special Economic Zones and moving from traditional industry to adding value to exports through technology driven solutions.
He said that ADB could assist the government by providing expert technical advice to BOI as well as by creating a fund to finance and address the shortcomings in the existing 7 Special Economic Zones.
The Director General ADB told Haroon Sharif that his organization ready to help by bringing in their expertise for formalization of different policy frameworks as well as by linking the private sector investments with investment opportunities in Pakistan.
He said that the ADB team visiting Pakistan to look at opportunities to invest in private ventures.
Liepach shared that ADB was keen to enhance connectivity for trade and investment with Central Asia as well.