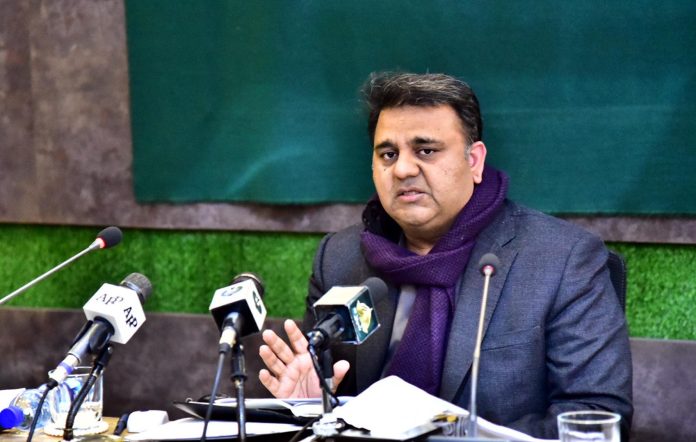 FAISALABAD, Jan 3 (APP): Minister for Information and Broadcasting Chaudhry Fawad Hussain on Monday said Pakistan Muslim League-Nawaz (PML-N) President Shehbaz Sharif was both legally and morally bound to bring his elder brother Nawaz Sharif back to the country as per his commitment given in the court.

Nawaz Sharif was allowed to go abroad for treatment after Shehbaz Sharif submitted an affidavit in the court that he would bring his brother back in case the former did not return, he said while talking to the media here after condoling with Omer Nazar Shah, Chairman of Aspire Group of Colleges, over his mother demise.

Flanked by Minister of State for Information and Broadcasting Farrukh Habib, Fawad said they had no personal enmity with Nawaz Sharif, who should better return home on his own and face the cases pending in the courts.

He said the Sharif family did not have any evidence to prove the legitimate purchase of the apartments owned by them in London. The public had every right to ask them to give details of the properties bought by them through ill-gotten money, he added.

The minister said the opposition, which was only doing politics of hatred, indulged in attacking the state institutions. The politics based on sectarianism was harmful for the country, and it should be discouraged at all levels, he added. Fawad said unfortunately the opposition was being led by Maulana Fazlur Rehman, who accepted results of those elections whose results came in his own party’s favour.

The ‘march’ planned by the Maulana, he said, posed no threat to the government. It was expected that he would not be able to undertake the march. The Maulana had launched a march towards Islamabad in the first of year of the present democratically elected government, but failed to derailing it, he recalled.

He ruled out the possibility of giving any relief to those who had been facing corruption cases . The Pakistan Tehreek-e-Insaf government would continue to implement its accountability agenda as its voters wanted the corrupt behind bars.

The people, he said, were not satisfied with the accountability process as the plunderers like Nawaz Sharif, Shehbaz Sharif and Asif Zardari had not yet returned the looted public money.

He said all political parties must adopt parliamentary norms and work in unison in the Parliament to carry forward the agenda of system reforms. The government wanted to introduce election reforms and needed the opposition’s cooperation in that regard, he added.

The minister said the next general election would be held in 2023 and its preparations would start by the month of August this year. He said the government had successfully completed negotiations with the International Monetary Fund and the amended finance bill would be passed by the National Assembly by the mid of current month.

He said the government was making all-out efforts to control inflation. There had been impact of global inflation on the masses and initiatives were being taken to provide them relief, he added.

The increase in the prices of essential commodities, he said, was natural as the country had become a net importer of petrol, edible oil and pulses. As normalcy had returned to the global market, the prices of imported items would decline soon, he hoped.