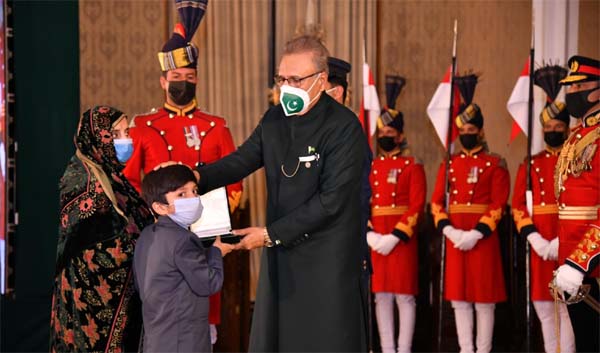 ISLAMABAD, Mar 23 (APP): President Dr Arif Alvi emphasized the society and government to ensure a healthy and secure atmosphere for women to make them play their full and responsible role for achieving a developed and successful Pakistan.

“The creation of a Naya Pakistan, a changing Pakistan, a progressive Pakistan and a successful Pakistan can only be achieved when women will play her full role in the society with responsibility,” the president said addressing the Hum Women Leaders Award 2021 hosted by Hum Network aired on Tuesday.

The event marked the conferment of awards to women in recognition of their contribution in human rights, girls’ education, armed forces, police services, environmental protection as well as fine arts.

However, the only man honored with the award was Malik Rafique Awan to recognise his remarkable contribution of upbringing his five daughters to make all qualify the CSS exams. Two of her daughters presented the award to their father as renowned actress Bushra Ansari also joined them.

The president said that besides providing them education and health facilities, the society as well as the government should ensure their protection to the extent that “they should not be irritated, hurt and harassed.”

He said that the efforts for women rights were decades old and recalled and appreciated the active role of Fatima Jinnah and Begum Ra’ana Liaqat Ali Khan. He also spoke high of the contribution by President Hum Network Sultana Siddiqui, who became an inspiration for many others.

The president said Islam had granted rights to the women including the inheritance rights at a time when there was no concept of women rights in the society.

He said the prevailing situation manifested that the country moved backward instead of making advancement on women rights despite it being a Muslim country.

The president strongly advocated for women’s better health by addressing the issues of malnutrition and stunted growth and girls’ education by doing away with the discouraging customs.

Moreover, he also called for women’s financial empowerment and urged them to take full advantage of government’s initiative of special scheme to extend up to Rs 5 million loan to them on even below 2 percent markup.

The president also emphasized the protection of jobs for women particularly after their maternity leave as their education had involved huge expenditures by the parents as well as the government.

He particularly urged media to play its full role for creation of a safe and healthy environment for the women besides ensuring the character building of the children.

Earlier, the president presented an award to Lt. General Nigar Johar.
First Lady Samina Alvi presented the award to Sufi Singer Abida Perveen and reiterated her resolve to continue striving for bringing about a change in Pakistan vis-à-vis women rights.
In her address, President Hum Network Sultana Siddiqui thanked the president for allowing to hold the event at Presidency which showed the whole federation was backing the efforts for protection of women rights.

She urged media to highlight the contribution and hard work by the women and said the annual award was meant to make them strive to do even bigger things.