ISLAMABAD, Dec 24 (APP): Pakistan’s Ambassador to Afghanistan, Mansoor Ahmad Khan on Friday urged international community, especially neighboring countries to adopt a proactive approach to achieve lasting peace in Afghanistan which is currently on the brink of a humanitarian catastrophe.

At a session on “Pak Afghan Storytelling Series” organized here by Pak-Afghan Youth Forum, he appealed to the world to come forward and provide timely assistance to 40 million people of Afghanistan as the country is heavily dependent on foreign aid.

“Pakistan has played a vital role and made earnest efforts across the region for sustainable peace in Afghanistan,” he said.

Ambassador Mansoor said Pakistan is a member of all regional forums and Troika plus, comprising China, Russia, and the United States and taking inclusive steps to form an inclusive and representative government in Afghanistan.

“When Afghanistan and its population were in distress it was Pakistan embassy in Kabul that did not close its operations and facilitated international community for their re-location in Pakistan and carry out humanitarian activities,” he said.

During evacuation process, the government of Pakistan took supportive measures at borders to manage  huge influx of Afghan people coming to Pakistan, he said, adding that Indian wheat is also being transported through Pakistan to Afghanistan for humanitarian assistance.

To a query, he said situation in Kabul is totally changed as Taliban are now fully engaged with the international community through dialogue and seeking lifting of economic restrictions.

He clarified that it was policy of Pakistan not to intervene in internal affairs of Afghanistan as it was right of the Afghan people and responsibility of their leaders whatever system they want for themselves.

“Afghanistan is our closest neighbor and both the countries share around 2600 kilometers land border. We only support them for political engagements with international community,” he noted.

He said the Taliban needs to evolve an indigenous system that was acceptable to all groups locally and internationally.

Pakistan’s main interest is to bring political and economic stability in war-torn country after 50 years of political turmoil.

During past years, he said Afghan regimes never had an entire control of country’s territories that provided space to various terrorist groups.

At present the Taliban government has full control over the country, he said adding if the present government addresses humanitarian, educational, and economic issues as well as continue to extend cooperation with international community in counter-terrorism, that eventually end an era of war in Afghanistan and move the country towards stability prosperity.

He emphasized the need for creating an environment to expand bilateral ties between both the countries with cooperation in various fields including health, education, commerce, agriculture,  industry etc.

Responding to a query about women education in Afghanistan, he said after August 15, the new Taliban regime had started higher education for girls across 12 provinces in the country, hoping that girls schools would be reopened in rest of the provinces soon.

There was a need to provide such kind of environment where cultural barriers may be addressed by establishing separate schools for girls and arrangements of segregated classes, he maintained.

Pakistan has provided every possible assistance to Afghan nationals in education sector, he said, adding that over 50,000 Afghans were serving in public and private sectors of their country after getting an education in Pakistan.

Around 1,000 scholarships were awarded to Afghan nationals by Pakistani government with 100 seats reserved for girls.

About the recognition of new Taliban regime, he emphasized the need to adopt a comprehensive approach and coordinated efforts with international community for obtaining desired outcomes.

Pakistan’s main focus was to engage the international community with Afghanistan on humanitarian issue,

economic front and later other matters.

Commenting on Afghan visa policy, he said Pakistan has eased visa process after making it online to facilitate people of the neighbour country.

The Envoy said India always used Afghan land as a launching platform to carry out terrorist activities against Pakistan. However, the new government in Afghanistan has given a clear policy that their soil would not be used for terrorism or against any country, the Ambassador concluded. 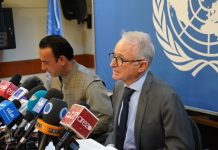