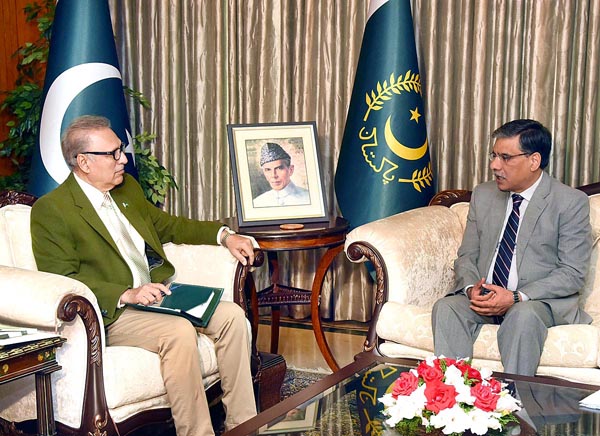 ISLAMABAD, Dec 26 (APP):President Dr Arif Alvi Wednesday stressed the need of launching a public campaign to create awareness among the masses regarding the filing of complaints to the Federal Ombudsman.
He said this while talking to Federal Ombudsman Syed Tahir Shahbaz, who called on him here.
The president directed to hold quarterly seminars around the country for awareness among the general public for approaching the Federal Ombudsman for the resolution of their grievances.
He also agreed to chair a joint seminar of federal and provincial ombudsmen to sensitize the people about the role of those offices that resolve the complaints of general public at their doorsteps.
The president also advised to take the Pakistan Telecom Authority (PTA) and Pakistan Electronic Media Regulatory Authority (PEMRA) on board for telecasting the awareness campaign in resolving the public complaints by the Federal Ombudsman.
He also directed that the Sui Northern Gas Pipelines Ltd and electricity distribution companies should print messages from the Federal Ombudsman for approaching the office if they were unable to solve their complaints.
The president further directed to launch a mobile application (app) to facilitate the general public in accessing the services offered by the Federal Ombudsman.
During the meeting, Syed Tahir Shahbaz briefed President Alvi about the performance of the Federal Ombudsman Secretariat during the year.
He said his office had so far disposed of 68,000 complaints, of which 92% had already been implemented, and the ratio was likely to further improve.
The federal ombudsman also informed the president about different special studies undertaken by his office on the direction of the Supreme Court.
In collaboration with UNICEF, the Federal Ombudsman Office had also carried out a need assessment survey of different facilities in six jails located in all the provinces, he added.
The president appreciated the efforts made by the Federal Ombudsman Office and directed that philanthropists should also be urged to contribute towards the welfare of prisoners, especially juveniles.
The federal ombudsman also informed the president that an Integrated Complaint Management System had also been launched for 20 federal agencies which had large number of pending complaints. It allowed the Federal Ombudsman Secretariat to transfer to its portal all such complaints which had not been resolved by the agencies within 30 days. In future, more agencies would be added to the integrated system to provide speedy relief to the public, he added.