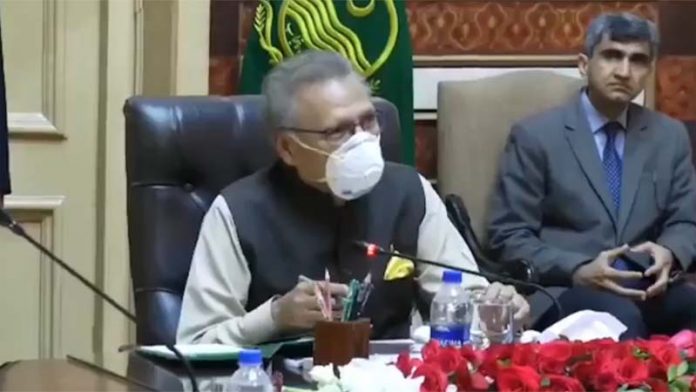 LAHORE, Apr 8 (APP):President Dr Arif Alvi on Wednesday said the coronavirus pandemic was a national issue and not a political one, which could be tackled through collective national efforts as the Prime Minister’s Corona Tiger Relief Force was based on the Islamic concept of community help
The president spent a hectic day in the provincial metropolis and attended various events to see the measures taken by the Punjab government to check the spread of coronavirus.

He also visited the residence of martyred Wing Commander Noman Akram to condole with his family and offer Fateha for his departed soul. Punjab Governor Chaudhry Mohammad Sarwar accompanied the president.

The president was briefed by the Punjab government on ‘COVID-19: Prevention, Mitigation and Control’ here at the Darbar Hall of the Civil Secretariat, where he was received by Chief Minister Sardar Usman Buzdar.

Later he was given a briefing on the measures by the Health Department to contain the coronavirus spread, continuation of educational activities, lockdown and exemptions, heat mapping, CM’s Insaf Imdad Programme and other steps taken in the war on deadly virus.

Speaking on the occasion, President Arif Alvi commended the efforts of Punjab government in fighting the coronavirus and stressed the need of early supply of ration and financial support to the needy and deserving families, who were affected by the lock-down.

He said the commitment and dedicated efforts against the virus by the country’s institutions would lay the foundation of a new Pakistan.

President Alvi directed the provincial administration to ensure that industrialists adhered to the standard operating procedures (SOPs) for the coronavirus while implementing the government protocols to protect their labour. He also asked to issue passes to the industrial labourers so that they reach their workplaces easily during the lockdown.

He stressed the need for taking Ulema on board while deciding about prayers and other religious congregations, especially ‘taraveeh’ during the holy month of Ramazan in case the lockdown was extended by the government.

The president said import of 3D/digital printing machines and its materials were banned during the lockdown but the commerce minister had recently allowed the import to ensure availability of ventilators in Pakistan.

The Ministry of Science and Technology and some other local institutions had also developed ventilators, which were in testing process, and would be made available after their approval. However, Punjab should place its actual demand so that the federal government could provide it the equipment as soon the same were available, he added.

About hydroxychloroquine, he said, the drug was being manufactured in various countries such as Germany, the US, France and Turkey, and the federal government had contacted Turkey in that regard. As soon it reached Pakistan, Punjab would also be supplied accordingly, he assured.

Chief Minister Sardar Usman Buzdar on the occasion apprised the president of the various initiatives by the Punjab government to fight the pandemic and support the families.

Governor Chaudhry Mohammad Sarwar commended the efforts and the crisis management by bureaucracy, police, health department, doctors, paramedics and all other institutions.

Dr Yasmin Rashid told the meeting that suspected corona patients were being treated at quarantine centres, while those with positive COVID-19 were being hospitalized. BSL-III laboratories were being established at divisional headquarters in the province, she added.

During President’s visit to the University of Health Sciences (UHS), he inaugurated a Telemedicine Centre for Women and watched working of the telemedicine centres and how they provided online information to the callers.

He hailed the research initiative of the public sector university to find vaccine for the cure of coronavirus pandemic, stressing the need of private-public partnership (PPP) in making the research project a success. He also lauded the indigenous production of personal protective equipment by the UHS.

Later in the afternoon, a briefing was held for President Arif Alvi on the working and impact of the Prime Minister’s Corona Relief Tiger Force (CRTF) in the province while a detailed presentation was also given on the Punjab governor’s telemedicine helplines and tele-ration services during the lock-down in the province.

In his address, President Alvi said the Prime Minister’s Corona Relief Tiger Force the concept of Tiger Relief Force was embedded in the Islamic society and the culture, where the mosque used yo be the center of public service in the past.

“It is heartening that some 814,000 volunteers, all of them being under 30 years of age, have been registered so far to become part of the Tiger Relief Force, who have the spirit of social service and self-help during the lockdown,” he said.

“Civil Defence used to be the only relief service in the days of war in the past but the war on coronavirus demands a different approach to deal with the treacherous enemy which has permeated our society and the PM’s Tiger Relief Force will help the people against this enemy,” he remarked.

Hailing telemedicine helplines established by the Punjab government, the president said 30 to 40 per cent cases of depression were recorded due to the coronavirus pandemic in the world and urged Punjab Governor Chaudhry Mohammad Sarwar to establish more mental health helplines, besides the existing centres at the Punjab University and Government College University (GCU).

President Alvi said Pakistan’s healthcare system would emerge stronger from the coronavirus pandemic and a more comprehensive health restructuring would take place in near future. The telemedicine helplines could provide a substitute to the outpatient departments (OPDs) in the public sector hospitals and lessen burden on the hospitals.

The president said “Joint family system has revived in the country while the spirit of philanthropy has also been strengthened in the face of pandemic.”
He paid tribute to the medical professionals and paramedical staff, police, Rangers, army and the media in their fight against the COVID-19 pandemic.

Speaking on the occasion, Governor Chaudhry Mohammad Sarwar said the PM’s Tiger Relief Force was an apolitical institution, which would work above political considerations. Deputy commissioners were authorized to recruit the volunteers in their districts, who would work without any monetary benefit.

He said the government was committed to provide relief to the deserving people with the help of National Database Registration Authority and Rescue 1122. About 50 per cent of the Punjab population would get relief on merit, he added.

President Arif Alvi was also briefed on the working of the Prime Minister’s Tiger Relief Force in the province. He was also given a briefing on the telemedicine helplines and tele-ration helplines in Punjab and other provinces as well.

President Arif Alvi also visited the residence of Shaheed Wing Commander Noman Akram to pay homage to his great sacrifice and condole with his family.

Wing Commander Noman Akram had embraced martyrdom when his plane crashed during the rehearsal of the Pakistan Day parade in Islambad.
The president offered Fateha for his departed soul. Governor Chaudhry Mohammad Sarwar was also present on the occasion.

Earlier on his arrival in the city, President Arif Alvi was received by Governor Chaudhry Mohammad Sarwar, who later met him at the Governor House.
During the meeting, the governor highlighted the anti-coronavirus pandemic services as well as relief efforts carried out for the destitute across the province.

He also briefed the president on the setting-up of ‘Governor Punjab and Chief Minister Telemedicine Helpline’ in different cities of Punjab and how the helplines provided free medical consultation, advice to the callers from home and abroad on coronavirus round the clock.

He said the telemedicine helplines had so far benefitted about 70,000 people in the province.

Chaudhry Sarwar also dilated on his plans to help establish telemedicine helplines in Azad Jammu and Kashmir, and the three provinces of Balochistan, Khyber Pakhtunkhwa (KP) and Gilgit Baltistan (GB).

President Arif Alvi was also informed about Governor’s Tele-ration Helpline which is dedicated to provide free ration to the jobless and needy during the lock-down due to COVID 19 outbreak in the province.

President left for Islambad in the evening when he was seen off by the governor and chief minister at the Governor’s House.