KARACHI, Aug 03 (APP): Federal Minister for Climate Change Sherry Rehman on Wednesday said this was the first time that federal government was working on ground for the relief of flood affected people in provinces.

Addressing a cheque distribution ceremony among flood affected people of Sindh at Commissioner Karachi office, she said Prime Minister Shehbaz Sharif had constituted a committee for flood relief to assess the losses and damages caused by the floods.

She said right now few affected persons were being given cheques of Rs. 1 million each while others affected in Sindh and Balochistan would also be compensated sooner.

The minister said all the political parties and stakeholders were on same page for the relief of affected people. The committee formed by PM had visited parts of interior Sindh affected with floods.

She said floods had caused about 47 deaths, damaged 18 thousand houses, 900,000 acres of crop fields besides the losses of livestock. The people whose houses were damaged fully would be compensated with Rs. 0.5 million and those with the partial damages would be given Rs. 0.25 million. Over 528 roads were damaged, 44 small and large bridges had collapsed.

She said the affects of climate change had started to appear as it rained more than normal. Only Karachi received about 600 millimeter of rains during this monsoon.

Sherry Rehman said most of the areas in Thatta, Badin, Keti Bandar were still flooded while the met department had predicted more rains in coming days. 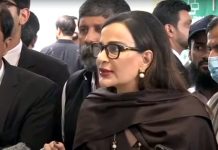