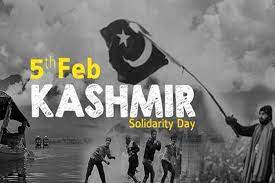 ISLAMABAD, Feb 5 (APP): The Indian Prime Minister, Narendra Modi’s ‘New Dawn’ for Kashmir and Ladakh turned to be dark black night for Kashmiris as the occupation forces broke all the records of repression since the abrogation of Article 370 and 35A, All Parties Hurriyat Conference said.

While snatching the special status of Kashmir on August 5, 2019, the Indian premier had said that a ‘new dawn’ was beginning in Jammu & Kashmir and Ladakh.

“30 Months or 131 Weeks or 917 Days. This is the number since Kashmir has witnessed unprecedented repression,” said All Parties Hurriyat Conference (APHC) while sharing a heartbreaking video on its official twitter handle. “So What was the new dawn?”, it questioned.

It shared message of senior APHC leader, Mirwaiz Umar Farooq, who has been in house arrest for around 130 weeks, saying that Kashmir actually has been transformed into a big slaughter house.  He said, restrictions have been imposed and his house was virtually transformed into a police banker      .

The APHC said, the grand mosque of Kashmir was barred for 117 Friday prayers. The video features a common man of Kashmir describing the closure of mosques a big examples of cruelty and oppression.

It said that India was violating the rights to a funeral to the families whereas around 156 families were denied their right to burial and their slain family members were buried in far-off places in unmarked graves.

It said that dozens of Huriryat leaders including Yasin Malik, Shabbir Shah and Asiya Andrabi have been put behind bars while journalism continued to be crime in IIOJK.

This is the number since Kashmir has witnessed unprecedented repression.

Leaders such as @MirwaizKashmir were detained. Jamia Masjid is under siege. Journalism is still a crime.

The APHC leader said that after August 5, 2019, India left no stone unturned to demoralize Kashmiri people by breaking all world records of oppression, but despite all these cruelties, Kashmiris stood fast to continue their struggle.

Chairman, Kashmir Institute of International Relations, Altaf Hussain said that India had crossed all the limits of brutality and even journalists and human rights activists were not spared.

Another APHC senior leader, Shaikh Abdul Mateen, who is also representative of existing incarcerated APHC Chairman Massarat Alam Bhat said that  observance of Kashmir Solidarity Day by Pakistan give courage to struggling Kashmiris to carry on their fight for their right to self-determination.