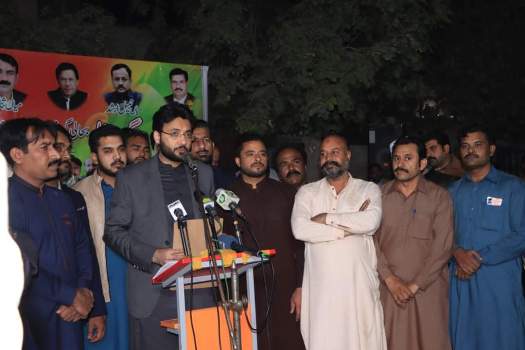 FAISALABAD, Nov 28 (APP):State Minister for Information & Broadcasting Farrukh Habib has said that Pakistan is heading towards sustainable growth rapidly due to prudent policies of PTI government.

He was addressing a public gathering after inaugurating a number of development projects in Sir Syed Town here on Sunday night.

He said that exports, industry, trade, agriculture and national economy had been put on the path of development in three years while construction sector was booming with high speed.

He said that the country was at the verge of bankruptcy and reserves were for 15 days only when PTI took powers.

He said that Zadari and Sharif families looted and plundered national wealth with great impunity.

He said that the power looms were sold on tomato rates adding that textile sector was at the verge of total collapse.

The people were leading miserable life but the previous rulers indulged in making spatial palaces abroad instead of concentrating to improve life standard of common man in Pakistan.

“However, PTI government under dynamic leadership of Prime Minister Imran Khan has dragged out the country from multifaceted crises and now all economic indicators are positive”, he said, adding that the government was striving hard to eradicate poverty and unemployment. He said that PTI government set its priorities for national progress and prosperity and now Pakistan had witnessed exports of 25.4 billion dollars which would jump soon up to 30 billion dollars. The IT exports had touched 2 billion dollars and it was expected to increase up to 3 billion dollars in coming days.

Similarly, the government made legislation to ensure payment of sugarcane crop within 15 days to the farmers whereas the cane growers were deprived of payment for couple of years in the past, he added.
He said that PTI government had also doled out Rs.1100 billion among the farmers and the industrial sector was now running with full capacity.

Farrukh Habib said that the PTI government also adopted appreciable policy to tackle coronavirus pandemic and more than 100 million people have so far been vaccinated against COVID-19.
He said that PTI’s Ehsaas Programme was not only appreciated at national as well as international level but it was also ranked at 4th among 3400 such welfare programmes of the world.

“Now Prime Minister Imran Khan has launched Ration Programme with Rs.120 billion to facilitate 120 million to 200 million poor families. Under this programme, each family will get subsidy of Rs.1000 per month on daily use items, he added.

About development in his constituency, he said that Rs.100 million had been earmarked for water filtration plants at union council level while Rs.50 million were being spent on up-gradation of the dispensaries.

Earlier, the state minister also inaugurated renovation of government city dispensary with Rs.3.1 million, installation of water filtration plant in D-Block, restoration of water supply lines with Rs.100 million in B & D-blocks and a carpeted road up to graveyard in Sir Syed Town.
A large number of people including notables of the area were also present on the occasion.