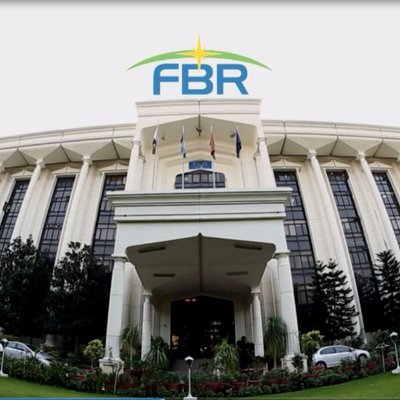 ISLAMABAD, Jul 01 (APP): ISLAMABAD, JUNE 30 (APP): Federal Board of Revenue (FBR) has created history by exceeding the revenue target set for the current fiscal year and collected tax of Rs6,125 billion during July-June (2021-22).

The collection exceeded the revised target of Rs.6,100 billion by Rs25 billion, according to provisional figures released by the board here on Thursday.

This represents a massive growth of about 29.1% over the collection of Rs. 4,744 billion during the same period, last year.

Likewise, the gross revenue collection increased from Rs. 4,996 billion during last year to Rs. 6,460 billion this year, showing an increase of 29.3%.

One of the key features of this outstanding performance by FBR is reflected in the significant increase in direct taxes which has registered growth of 32% over the last year.

This is in line with the policy of the incumbent government to enforce taxation on income earned thereby reduce indirect incidence of taxation. Furthermore, the net collection from Income Tax during the year is Rs. 2278 billion against Rs. 1731 billion last year whereas the sales tax of Rs. 2525 billion has been collected this year against Rs. 1983 billion last year.

Similarly, the net collection of Rs. 1,741 billion during the 4th Quarter of current financial year against Rs. 1,351 billion collected in 4th Quarter last year, represents an increase of 31.7% despite many challenges.

The year-on-year growth of 29.1% is unprecedented, particularly, as it is realized on the heel of 31.7% growth in 4th Quarter. These figures would further improve before the close of the day and after book adjustments have been taken into account.

On the other hand, the amount of refunds of Rs. 335 billion disbursed during this year compared to Rs. 251 billion paid in last year, reflects an increase of 33.3%.

Similarly, refunds of Rs.39 billion issued during June, 2022 against Rs.27 billion in June, 2021 increased by 43.8%. In the month of June, the refunds have been issued to more than 5800 taxpayers as compared to 3100 in June last year. This is reflective of FBR’s resolve to fast-track refunds to prevent liquidity shortages in the industry.

The robust revenue performance is even more significant due to effective enforcement by field formations.

It is pertinent to mention that FBR’s POS System to document retail sector has integrated a total number of 10,611 POS machines of 4563 Tier-1 Retailers across the country.

Total of 425 Million tax invoices were generated by Tier-1 Retailers integrated with POS. Total number of Six POS Computerized Draws have been held in which Prize money worth Rs. 318 million was disbursed among 6042 lucky winners. It is heartening to inform that the number of FBR invoices is increasing as a result of effective monitoring by FBR despite resource crunch.

Yet another watershed initiative by FBR to capture Large Scale Manufacturing(LSM)across the country through Track & Trace System(TTS) has already started paying dividends. Sales tax collection from Sugar Sector during the current crushing season (December, 2021 – March, 2022) under Track and Trade System amounted to Rs 26.03 billion as compared to corresponding period of previous crushing season which stood at Rs 19.9 billion, showing increase of 31% in four months only.

Likewise, Pakistan Customs has collected Rs 1 Trillion during this year against Rs. 747 billion under the head of customs duty in FY 2020-21 against the assigned target of Rs. 960 billion and exceeded its target by Rs.40 billion, registering a sizable growth of 34%.

Whereas during the month of June, 2022 an amount of Rs. 115 billion has been collected under the head of customs duty against the monthly target of Rs. 88 billion which is 30% more than the assigned monthly target. Similarly, duty draw back issued by Pakistan Customs during the year are Rs. 33 billion as against Rs. 24 billion last year.

During this period, 1,136 Investigation Reports and Red Alerts were forwarded to the field formations involving revenue amounting to Rs.321 billion. 89 FIRs were lodged under Anti-Money Laundering Act, 2010 where more than Rs.66 billion were involved. Around 9,866 cartons were seized containing 98,660,400 cigarette sticks during the year.

Likewise, the Directorate General of Intelligence and Investigation (Customs) showed excellent performance by realizing revenues worth Rs. 2,942 million against Rs. 2,368 million, last year with an increase of 24.26%. This Directorate also seized 877 non-duty paid/tampered Seized vehicles during the year against 671 vehicles last year.