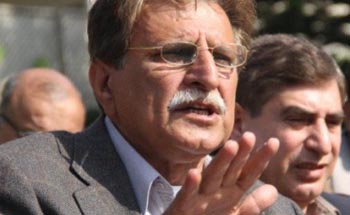 By Altaf Hamid Rao.MIRPUR (AJK): Mar 15 (APP):AJK Prime Minister Raja Farooq Haider Khan Friday said India could not demoralize the people of Azad Jammu Kashmir including those living close to the Line of control through its naked aggression at the LoC.
Addressing a public meeting at Choki in Samani valley, he said that Indian forces were resorting to unprovoked shelling from across the LoC and targeting the civilians to push them back but it could not succeed in its nefarious designs. He reiterated that the people living close to border are our first defense line.
Farooq Haider asked international community to take notice of Indian aggression and war crimes against civilians in AJK. He assured that his government was pooling all resources for rehabilitation of Indian forces firing affected people.
The Prime Minister said he would visit Smahni again next month. He said enemy was given a befitting response for his aggression here by downing his war plane. He lauded the bravery of pilot Hassan Siddiqui who downed two Indian planes when they tried to cross LoC.

Haider told the people that his government had sent a package of 5 billion rupees to federal government for 600,000 people living at 740 kilometer areas of LoC. It includes provision of water, roads, protective bunkers and other basic needs. He further assured that his government would resolve the problem of power voltage in Smahni and Sehnsa. He paid tribute to valiance of ten persons who captured Indian pilot.

The AJK Premier said 10 million each constituency were provided in emergency by his government and added that funds were being provided for ambulances and community bunkers. He assured that special funds would be earmarked for education, health and infrastructure for people living at LOC in the next budget.
AJK premier, earlier, planted a sapling at Chowki college as part of spring tree plantation drive.