ISLAMABAD, Aug 23 (APP): Prime Minister Imran Khan on Monday said the best solution to all social problems lay in following the Seerat of Prophet Muhammad (PBUH) and emphasized that besides Islamic history, the children should be taught the golden principles of his life.

Chairing a review meeting on the implementation of Single National Curriculum, the prime minister said the Prophet’s Seerat was a beacon for all the coming generations with its specific emphasis on ethics, morality and mannerism.

The prime minister directed finalization of the curriculum for sixth to twelfth grades by the end of this year, in consultation with provinces.

He expressed satisfaction over the performance of the Ministry of Education in implementing the national curriculum and emphasized on its constant review and necessary changes.

Shafqat Mahmood gave a detailed briefing on the inclusion of content related to the teachings of Seerat-un-Nabi (PBUH) in the curriculum.

He mentioned that scholars belonging to various religious schools of thought had been consulted in detail.

The meeting was told that focus had also been laid on the quality of teacher training and examinations. 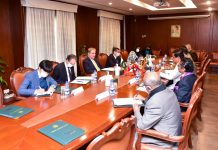