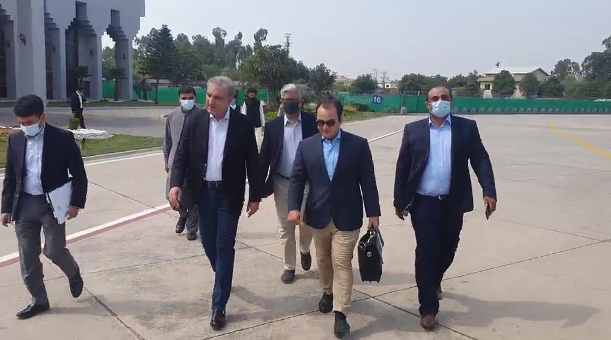 ISLAMABAD, Apr 11 (APP):Foreign Minister Makhdoom Shah Mahmood Qureshi here on Sunday left for a two day visit to Germany on the invitation of the Foreign Minister of Germany Heiko Maas.

During the visit from April 11 to 13, he will also call on the President of the Bundestag, Wolfgang Schauble and have interactions with other dignitaries.

In a statement, Qureshi said during the talks, the two sides would review the entire gamut of Pakistan-Germany relations and discuss ways and means to further deepen bilateral cooperation in diverse fields, including trade, investment, health, security and defence, education, tourism, and people-to-people exchanges.

He said he will take the German leadership into confidence on the security environment in the region of South Asia particularly about the peace process in Afghanistan.

This year, Pakistan and Germany were celebrating the 70th anniversary of establishment of diplomatic relations. Both countries were planning to undertake a number of activities in this context.

Pakistan and Germany had been collaborating closely on regional matters and at the multilateral fora. Germany was the largest trading partner of Pakistan in the EU. Germany was also home to more than 100,000 Pakistani diaspora.

UN should intervene to end Israeli attacks on Palestinians: Qureshi

Pakistan to welcome 3rd-party facilitation by Saudi Arabia, other countries on talks with India: FM