In the first match of the day, Master Paints thrashed Imperial Holdings by 13-3.5. Marcos Panelo’s excellent eight goals were the treat to watch, which made him top scorer from the winning side. Farooq Amin Sufi and Babar Monnoo contributed with a brace each and Bilal Haye struck one goal. Hashim Kamal Agha and Mian Hussain Iftikhar scored one goal apiece from the losing side which had one and a half goal handicap advantage. Tom Brodie and Amirreza Behboudi were the field umpires.

In the second match of the day, AOS outpaced D Polo by 7.5-2. Guy Gibrat emerged as top scorer from the winning side, which was enjoying one and a half goal handicap advantage, while the remaining contribution came from Shah Shamyl Alam, Ahmed Zubair Butt and Hamza Ali Hakeem – all hit one goal each. From the losing side, Lt Col Omer Minhas scored a brace each.

In the third match of the day, Diamond Paints/FG Polo outclassed Guard Group/Platinum Homes by 11-4. Tom Brodie was the man in charge, who fired in fabulous four goals while Saqib Khan Khakwani also played superb polo and succeeded in hammering a hat-trick.

The other contributions came from Mian Abbas Mukhtar and Mir Shoaib Ahmed – both struck a brace each. From the losing side, Taimur Ali Malik thrashed three goals while Amirreza Behboudi scored one.

Tomorrow (Wednesday), three matches will be played at the Lahore Polo Club ground.

Samba Bank will vie against Master Paints in the first match at 1:00 pm, Remount will take on Price Meter.PK in the second match at 2:00 pm while in the third match at 3:00 pm, Barry’s will compete against AOS. 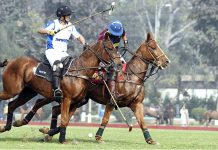 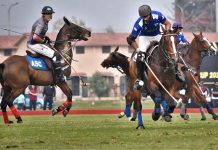