During the conduct of the operation, intense fire exchange took place between the security troops and terrorists, an Inter Services Public Relations (ISPR) news release said.

The Forces also recovered weapons and ammunition from the killed terrorist. 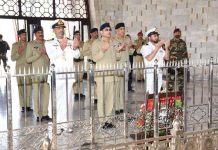