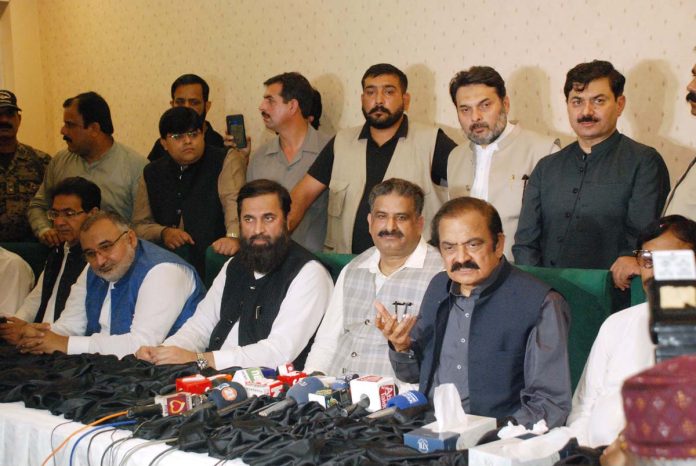 ISLAMABAD, May 31 (APP): Minister for Interior Rana Sanaullah Tuesday said the PTI’s long march was not a political activity rather a criminal activity to besiege the Federal Capital rendering the government dysfunctional.

As the Pakistan Tehreek-e-Insaf (PTI) had no political narrative, it had nothing to do with democratic norms, he said and added that the government would present evidence in that regard at relevant forums.

Besieging the Capital was surely a criminal activity, punishable under the Penal Code, he said while briefing the media, along with Minister for Communications Maulana Asad Mahmood and Prime Minister’s Advisor Qamar Zaman Kaira about the decisions taken in the Federal Cabinet meeting chaired by Prime Minister Shehbaz Sharif.

Rana Sana said the cabinet thanked the people, especially the residents of twin cities of Rawalpindi and Islamabad, for not responding to the PTI’s long march which was aimed at creating chaos in the country.

The minister claimed that PTI Chairman Imran Khan had misused the resources of Khyber Pakhtunkhwa government, besides forcing the government employees and police personnel to take part in their march for “attacking the Federation”.

He alleged that the PTI had the “criminal agenda” of dividing and misleading the nation to fulfill its nefarious designs. A few thousands armed people, he claimed, either accompanied Imran’s procession from KP or came from Mianwali to Islamabad.
Wherever they were stopped, they resorted to firing on the police and security agencies, he added.

Rana Sana said the PTI leaders had directed their party workers to directly go to D Chowk, instead of stopping at H 9 as directed by the Supreme Court. Some 3,000 to 4,000 criminals were sent to Islamabad as an advance party, who were accommodated at the KP house Parliament Lodges and some private residences, he claimed.

He said arrangements were made for the PTI’s public meeting at H-9 on a very short notice, but the party had the only objective of creating anarchy in the country and making the Federal Government dysfunctional.

When the PTI leadership was given permission for a public meeting on the SC directives, they instead directed the workers to reach D Chowk, he added. They misused the permission for a political rally and thus committed the contempt of court by flouting the Supreme Court directives.

Imran Khan’s confession about the presence of armed people in the PTI’s march supported the government’s point of view, he added. Except from the KP and Gilgit-Baltistan, the people from no other province heeded to the PTI chief’s call.

It was strange that the PTI chief, however, could not see the armed people in his long march at the starting point of his march in Swabi, who were shown on television screens, Rana Sana added.

Th minister said the police had only tear gas and rubber bullets at their disposal to disperse the crowd.

He said he had proposed to the Federal Cabinet to allow registration of a criminal case against the PTI leadership, including Imran Khan, KP chief minister and other leaders, as their telephone calls and announcements were available as a proof.

A criminal case should be filed and the mastermind should be arrested as early as possible, he added.

Rana Sana expressed the hope that the sub-committee constituted by the prime minister on the long march would consider his opinion and give suitable suggestions. Imran Khan had stated that the reason for calling off the long march was fear of violence by the participants, he added.

Endorsing Imran Khan’s statement of violence in the march, he pointed out, that the protesters fired at the police in Attock and Mianwali districts as well as in Islamabad. On the other hand, not a single bullet was fired by the police in Islamabad or Punjab, he added.

To a question, he said being a sensitive area, the Red Zone was fully protected as the police adopted a strategy not to allow the PTI activists to gather at D Chowk in large number.

He said the police personnel were tortured by the “PTI goons”, while the KP Irrigation Department cranes, and KP Police vehicles were part of the march.

To another question, he said the PTI started its long march with full preparation. Imran Khan at his public rallies instigated the people to violence. However, despite lack of time, the government made suitable arrangements to contain the march participants, he added.

He assured that next time the government would not allow them to break barriers and provide lodging to advance gangs in Islamabad.

Even during the current march, if the PTI had not misled the SC, more than 2,000 activists would not have reached Islamabad, he added.

He said cases had been registered against the PTI leaders and workers for violation of law and order, and “if they give a fresh date for long march, they will be arrested”.

Answering a question about the ceasefire announced by the Tehreek-e-Taliban Pakistan, he said that its details would be shared after approval of the Federal Cabinet.