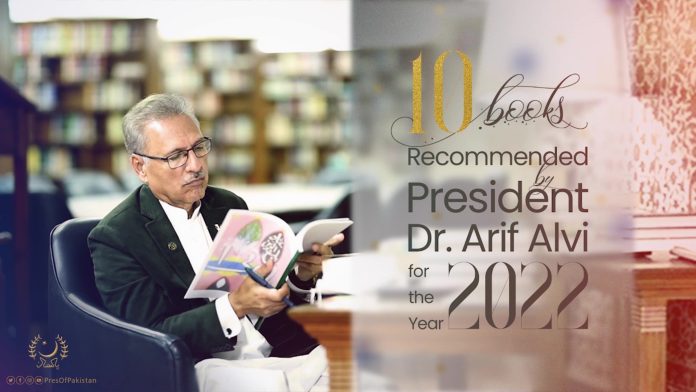 ISLAMABAD, Feb 13 (APP): President Dr Arif Alvi Sunday recommended a bibliography of ten valuable books for the readers in the year 2022, loaded with chapters of immense knowledge, research work, future world and history.
The president in a short video message urged the readers to continue quenching their quest for the limitless knowledge of the universe during their lifetime as Allah’s universe held a mammoth amount of knowledge while man’s life was too short.
Last year, the president had suggested a set of books for the readers to gain knowledge.
The president opined that the habit of book reading also helped in boosting the intellectual capacity of a reader. “There is no good luxury than reading a good book,” he added.
He said every year, he recommended a bibliography of books based upon his sequence of study. The president mentioned that whenever he found time, he indulged in book reading; whether he completely read out a book or partially, he was sure to glean knowledge as much he could.

The president further said his prioritization of books, he mainly focused on his search to get a glimpse into the creations of Allah Almighty.
Citing the first book of Shah Baleeghuddin ‘Tuba’, he said that it covered different aspects of the life of Holy Prophet Muhammad (Peace Be Upon Him) and the conspicuous chapters of the Islamic history.

The president said that he also focused on searching books, enveloping the history of Pakistan and the sub-continent, so that he could enhance his grasp of the contributions made by the leaders of Pakistan’s movement and their guiding principles for the Muslims of the sub-continent as well as the previous rulers of Pakistan.
The president cited the book ‘From Plassey to Pakistan’ written by Humayun Mirza, son of late president Iskander Mirza, covering different aspects of their family’s history.

He also suggested reading of ‘The End of India’ by Khushwant Singh who wrote it during 2005. The author had predicted that India was passing through a phase in which it would set itself on fire. It would not be destroyed by Pakistan rather doomed by itself due to its treatment of minorities.

The president also suggested ‘The narrow corridor’ written by Daron Acemoglu and James A. Robinson, highlighting the issues of states, societies and the fate of liberty.
He said the authors had delineated upon the narrow corridor of democracy and the challenges. The authors had cited the tight rope walking between anarchy, dictatorship and securing of liberty. Those nations made progress where the public voices had been heeded to, he added
In the ‘Sapiens’ the author Yuval Noah Harari, had given a brief account of history of humankind, its footprints affecting the environment and the subsequent DNA changes in the human species, the president said.
Suggesting another book for the readers, he said ‘The future is faster than you think’, by Peter H. Diamandis and Steven Kotler, dealt with the subject of the formation of the universe, big bang theory, time-space and the rapid changes in the world due to IT revolutions and the Artificial Intelligence.
He opined that the world was moving at fast pace due to these changes, and it was his cherished desire to see Pakistan taking the lead in this regard when compared with the rest of the world.

The president cited ‘Exponential’ a book written by Azeem Azhar, which explained how the progress in the scientific realms was made and how the society was unaware of such transformations.
The society could not realize the impacts of the social media, while the changes were not being felt by the governments and the policymakers, the president said reading out the main contents of the book.
He said that during his quarantine period he had finished reading the book within five days.
The president also suggested three other books, including ‘The age of AI and our human future’ written by Henry A. Kissinger, Eric Schmidt and Daniel Huttenlocker, ‘The Pentagon’s brain’ an uncensored history of DARPA by Annie Jacobsen which contained material about the latest nuclear research, defence matters, cyber security and space.
The president said keeping this perspective in mind, Pakistan must also brace itself with the latest defence preparedness, especially in cyberwar and cyber security.
Lastly, he referred to a book titled ‘I. Warbot’ by Kenneth Payen with the subject matter exploring the prospects of the robotic warfare era and the gradual replacement of human functions by robots in different sectors of life. 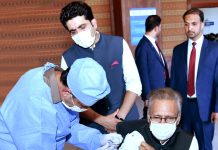 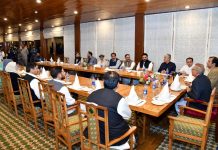 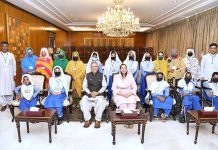 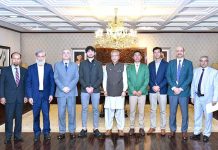 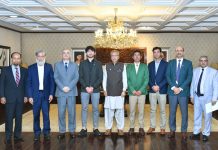 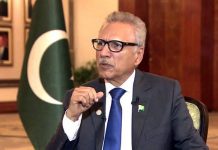