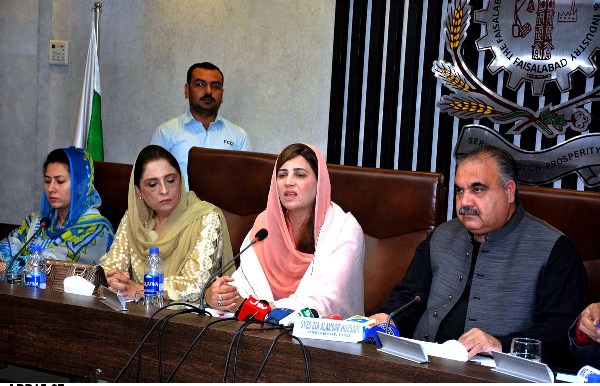 ISLAMABAD, Mar 17 (APP):Minister of State for Climate Change Zartaj Gul Wazir on Wednesday said a huge quantity of polythene bags and raw material were confiscated during a raid on a polythene bag manufacturing factory in remote rural locality of Tarnol in Islamabad and fine of Rs100,000 was imposed on its owner.

“While efforts have been beefed up for stricter enforcement of ban on use, sale and manufacturing of polythene bags in the capital city and surrounding areas since March 1, 2021, no one is being spared and fined when found violating the ban.” She emphasized.

Zartaj Gul said under these efforts, the ban enforcement teams are now regularly visiting the market places, stores, malls, other public places and manufacturing sites in the capital territory for stern action and monitoring of implementation of the ban on polythene bag.

“Not only customers but also shopkeepers, sellers and manufacturers of the environmentally-damaging polythene bags are being fined during the raids and warned to stop use, sale and manufacturing of polythene bags or face the punitive action in a more stringent way if caught again in possession of the banned polythene bags,” she emphasized.

Lauding the role of the official enforcement teams comprising officials of climate change minister Pak-EPA Islamabad, Islamabad Capital Territory Administration and Islamabad Police, she said without untiring efforts and aggressive chasing of the ban violators the enforcement of the polythene bag ban could not have been possible.

“I personally feel encouraged seeing the enforcement teams ensuring implementation of the law in all forms and manifestations, the state minister urged the people to cooperate with these enforcement teams and ensure that our neighbourhoods and business are free from the menace of polythene bags that are damaging not only the environment but also human and animal health,” Zartaj Gul expressed.

Under the re-enforcement of the complete ban on polythene bags beginning from March 1, use of all polyethylene bags at any level has been again made liable to be fined in the capital region of around 1.5 million people, she highlighted.

“Anyone who is found using, selling or manufacturing the polythene bags would face a severe action in the shape of fines,” she warned, adding that all relevant government organisations have been directed to remain vigilant and fine anyone found in possession of the polythene bags.

Syed Mujtaba Hussain, who is leading the entire enforcement drive against polythene bags in the city and Senior Joint Secretary of the Climate Change Ministry of grade 21, said that under the ongoing anti-polythene bags’ use campaign, he said wholesalers are being be fined up to Rs100,000, while shopkeepers are also being fined up to Rs10,000 and consumers up to Rs5,000 for first-time violations. The fine increases with repeated violations, he added.

“So far we have imposed fines to the tune of thousands of rupees on customers, shopkeepers, wholesalers and manufacturers since March 1 and confiscated thousands of polythene bags during various raids in different parts of the capital city and around areas,” said the senior joint secretary.

Lead expert on plastic pollution and chemicals at the climate change ministry, Deputy Director Dr Zaigham Abbas, who is also part of the ban enforcement efforts, felt sorry saying that though shopkeepers and people in markets showed being adequately aware of the devastating impacts of polythene bags on environment and public health, they expressed different excuses and demonstrated carelessness behind their using of the polythene bags.

“Nevertheless, they are being warned during the raids conducted in different areas of the city of the more stringent actions and fines against them if caught in possession of the polythene bags,” the climate change ministry official said.

They lead to a lot of waste that keeps amassing over the years and remain in the land and water bodies, which contributes to soil and water pollution, Dr Abbas added.