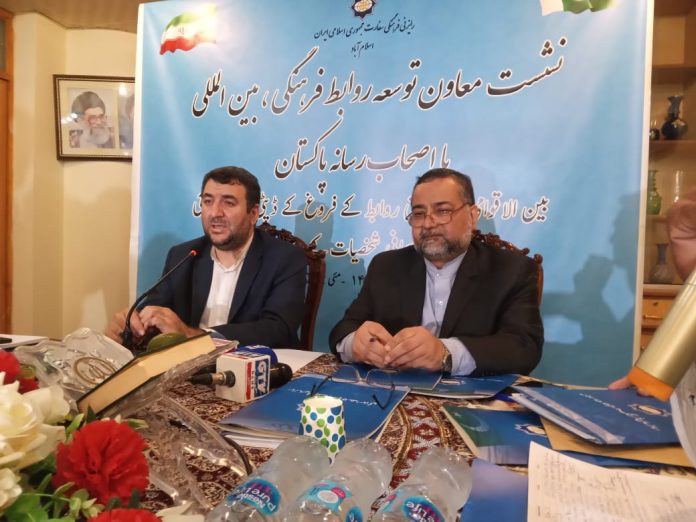 ISLAMABAD, May 27 (APP):Deputy Minister for Culture and Islamic Guidance Dr Hossein Roozbeh on Friday said the Islamic Republics of Iran and Pakistan, as two brotherly neighbouring countries, shared great cultural and religious affinity that should be enhanced for mutual benefits.

In a meet the press, the Iranian Deputy Minister flanked by his delegation member and also the Cultural Counvilor Attache of the Iranian Embassy Dr Asadi briefed the media over his visit and shared updates of his bilateral meetings.

Dr Roozbeh said, “Whenever any Iranian enters Pakistan he never feels strange as there is huge similarity between the cultures of the two nations. Islamic Republic of Pakistan is the only neighbouring country that has great religious and cultural affinity with Iran.”
He added both the countries have numerous points of commonalities. These close similarities provided the two nations an opportunity to unite through religious harmony, he said.

While showering his praise for the poet of East Dr Allama Muhammad Iqbal, he said, “Allama Iqbal is the bright door of cultural bondage between the two countries. The Supreme Leader of Iran also called Allama Iqbal as the great philosopher and genius of this century.”

He underlined that Iqbal’s teachings were a light of guidance and it’s obedience would lead both the nation’s to great destinations of glory.
“Iqbal has drawn the attention of the youth towards their hallowing great past. He also invited the youth to develop self confidence that can lead them to the apex of glory in this universe in his teachings”.

Dr Roozbeh added that the Iranian youth was following those paths of Dr Allama Muhammad Iqbal and have achieved many milestones following these guiding principles.
He said the Iranian youth lead Iran to the great heights of success despite all impediments of the hostile foreign powers, adding, “The new regime in Iran lead by President Ebrahim Raisi has focussed to channelise the talent of youth to achieve new heights of development.”

He highlighted that Pakistan has great significance in the Iranian foreign policy and it closely observed Pakistan throughout its creation and different phases of transition. “We have seen that Pakistan has a similar culture with that of Iran that is so overarching that it cannot be separated from Iranian culture.”

He suggested that if Pakistan had enhanced cooperation with Iran than it could also achieve great milestones.
“It’s the best example is that we have started our campaign from Pakistan as its our favourite nation to boost bilateral ties through cultural harmony.”

Earlier, Cultural Councilor of Iranian Embassy Dr Asadi welcomed all media and expressed his gratitude to the two-member delegation from Iran for visiting the Cultural Center.

Responding to various queries, he appreciated the passion and love of Pakistani nation for Persian language which was their historical linguistic heritage and said it was the same in Dr Allama Iqbal.
“We have given special directions to all our cultural centers to provide details for paraphernalia required to promote Iranian culture so that requisite measures could be taken in time.”
He urged the Pakistani media to visit Iran and explore the cultural advancements and development of Iran and guide their nation through credible information about Iran.