Addressing officers and jawans of security forces here, he said Gwadar port was not only important in the context of economy but also had significance for defence.

He underlined the need for improving condition of roads to increase trade with the Central Asian states.

“We have to focus on regional connectivity, promotion of trade and marine economy.”

The President observed that Central Asian states were eager to get access to Gwadar port and undertake trade through Afghanistan.

“Permanent peace in Afghanistan will have good effect on our economy.”

He said the international community had recognized our efforts against coronavirus.

Timely decisions against the coronavirus pandemic not only benefited our people but was also beneficial for the national economy, he added.

The President said all the security forces of the country played a positive role for defence and during every challenge facing the nation.

He said cyber warfare was more dangerous than the deadly weapons.

Pakistan had regularly faced cyber attacks and the security forces would have to be prepared to defend the country against these attacks, he added. 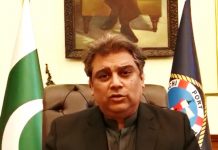