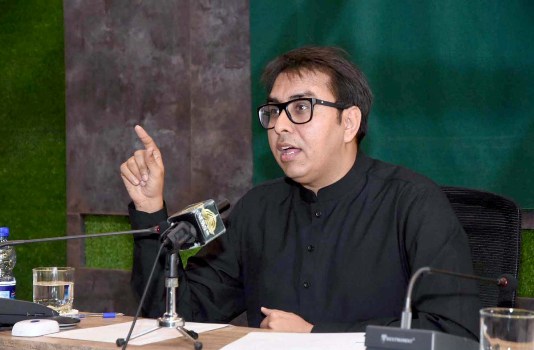 Addressing a press conference, he said they would accept Shahbaz Sharif as a leader of the opposition if he succeeds to get acquittal from the court of law in the cases against him.

He said that Prime Minister Imran Khan was not only the most popular but also only national leader.

Gill said, the courts had already declared the PML-N vice-president as a forger, thief and cunning woman. She submitted fake documents in the court, he added.

He said PML-N leader preferred to meet Indian businessman Jindal while refused to meet the leadership of Hurriyat Conference whereas Prime Minister Imran Khan raised the Kashmir issue at all international fora.

He said followers and leaders of PML-N always used indecent and derogatory languages.

However, he said, he did not want to use abusive language against PML-N females except they were forgers.

Gill said that the opposition parties leveled allegations against each other and even threw pictures of their opponents through helicopter.

He said Imran khan has also set up three cancer hospitals in the country where maximum patients were getting free treatment.

He said that Maryam Aurangzeb had spent the funds of Minister of Information and PID on her house and she should also be held accountable for that.

He said that the top courts of the country have declared Maryam Safdar a deceiver, forgers and culprit. “Qataris are your ATMs and the apartments are also given by them,” he said.

However, the government emerged successfully from the effects of Corona pandemic, he added.

The international financial institutions have also admitted that Pakistan’s economy has shown remarkable growth during the last fiscal year.

He said Sharif family used accounts of their employees for money laundering and transaction of Rs 16 billion was carried from their accounts.