Addressing at the inauguration of 886-kilometre-long Matiari-Lahore HVDC with a capacity of 4,400 megawatt power generation under the China Pakistan Economic Corridor (CPEC), the prime minister said the project would prove as a “leading energy transmission artery from the country’s south to north”. 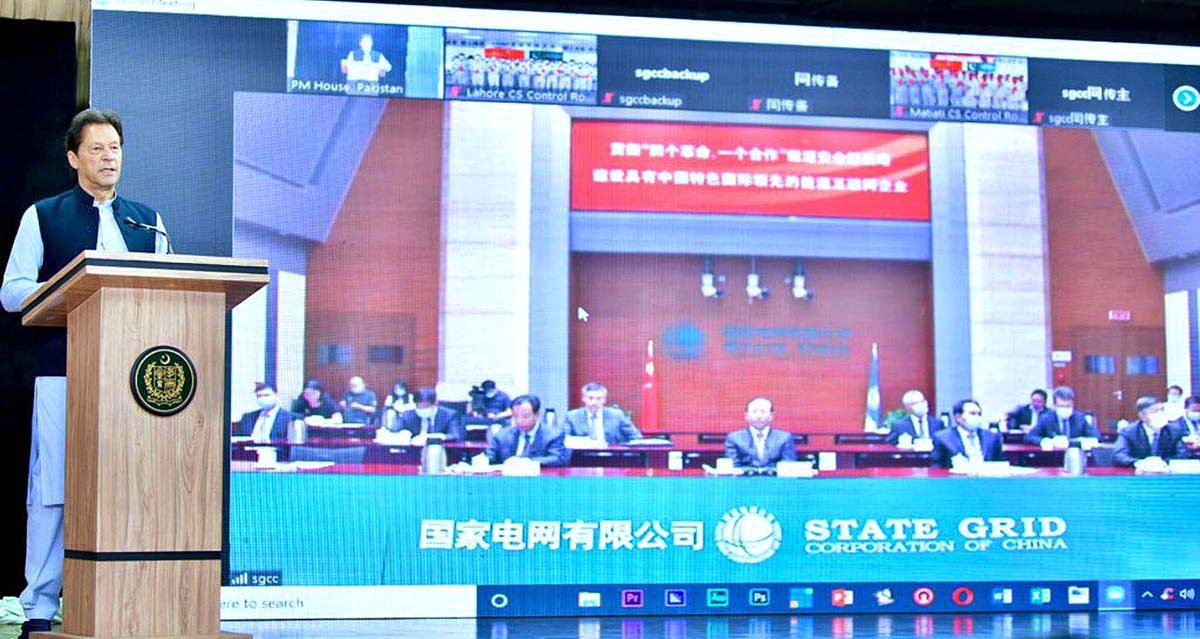 Imran Khan said the significant reduction of line losses would save billions and also lessen the burden on common man paying the expensive electricity bills.

He regretted that the previous government did not carry out on-ground work on the Matiari-Lahore project signed with China in 2013, which made the public immensely suffer the power load-shedding.

The prime minister expressed satisfaction that his government after assumption of power in 2018 carried out the construction work of the state-of-the-art Matiari-Lahore project at full pace and completed it despite the pandemic.

Besides energy, he said, other CPEC projects under Chinese President Xi Jinping’s Belt and Road Initiative relating to industrialization and innovation in agriculture would be launched in the next phase.

He hoped that completion of CPEC projects would lead to wealth creation and help the government pay off heavy debt.

Federal Minister for Energy Hammad Azhar said the project, which was made operational after testing it in three phases including the peak seasons, would help in removing the transmission bottleneck.

He said the CPEC power projects were the important pillars of Pakistan’s economic system and were acting as “smart and efficient sources” of green energy generation.

He said cheap electricity was key to socio-economic development of Pakistan and vowed that China would continue to extend its support in this regard.

He mentioned that the 886 km transmission line would go along 510 km of motorway and create around 70,000 jobs in the country.

President State Grid Corporation of China Xin Baoan in his video-link address to the ceremony said the 70th anniversary of Pak-China friendship was marked by cooperation at diverse levels for the benefit of their people.

He said his corporation would work closely with its local counterparts in Pakistan on projects of energy cooperation.

The National Transmission and Dispatch Company (NTDC) carried out a study through an international consultant which proposed HVDC technology for transfer of bulk power for its cost-effectiveness and lower line losses. Moreover, the requirement of ‘right of way’ for HVDC is less than High-Voltage Alternate Current (HVAC) lines.

The HVDC  line Matiari in Sindh to Lahore in Punjab will have 1973 towers and two converter stations with AC substations, one each at Matiari and Lahore.

It will have two grounding stations at 50-80 km from Matiari and Lahore converter stations and three repeater stations along the route of line to boost telecommunication signals, each at Salehpat, Rahiim Yar Khan, Hasilpur.

The National Electric Power Regulatory Authority (NEPRA) has approved the total cost of the project of $1,658 million (including taxes, insurance etc.) and has issued a tariff determination of Rs.0.74 per kWh at the rate of $ 1 (equal to Rs 104.4).

The monthly HVDC Line capacity charges for 4,000 MW are Rs 4.2 billion approximately (after indexation in tariff).

The project is being executed on Build, Own, Operate and Transfer (BOOT) basis for a 25 years term. The operation and maintenance of the converter stations will be carried out by Pak MLTC and that of the Transmission Line by NTDC.

The self-supported towers have been installed for bi-pole HVDC line with Quad Bundle Conductor and size of 4×1250 mm2.

The testing and commissioning of the project continued for more than one year and was completed on August 18, 2021 after its trial run for 168 hours along with capability demonstration tests.