ISLAMABAD, Aug 15 (APP): Senior leader of Pakistan Muslim League (Nawaz), Talal Chaudhry on Monday said former Prime Minister Imran Khan’s running from pillar to post to seek stay orders from the courts against his corruption, has nullified his claim of being a clean person.

Talking to media persons, he said “if Imran Khan is so clean why is he running around to get stay orders from the courts.” Imran Khan himself was used to say that whoever has a clean conscience, answers immediately to any allegation. Why Imran was getting stay orders against the call up notice issued to him (in the wake of the Election Commission of Pakistan’s (ECP) ruling in the foreign funding case).

He said Imran Khan was earlier threatening the establishment and now he was imploring to seek their blessings.

Imran has started making earnest appeals to powerful quarters to quash corruption cases against him.

He wondered the party, which talks about giving real freedom to the country, did not organize any ceremony on the Independence Day in Khyber Pakhtunkhwa and Punjab, where their party was in power.

Imran Khan has been using others for personal gains, Pervaiz Elahi will ditch Imran as he did to Pervez Musharraf.

He said the agenda of Imran Khan was to give establishment a role in the national politics.

Talking about recent public meeting of Imran Khan, Talal said Imran kept showing videos of himself to audience instead of making a big announcement in the recent rally.

Lashing out at PTI, he said the party brazenly ran trends against martyrs on social media.

Imran wanted to rescue by making Shehbaz Gill a scapegoat. There was a wide difference between criticism and treason, the case of Shehbaz Gill would be taken to logical conclusion.

The leadership of PML-N were arrested and remanded without notice, he said adding that Shehbaz Gill was currently in Adiala Jail which was under the Punjab Government, if he has been tortured then why has he not been given medical treatment till now.

Shahbaz Gil was enjoying A class facilities in jail. Food was being delivered to him with other facilities, people’s would be baffled when the things that have come to light during the investigations from Shehbaz Gill. 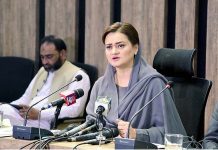