On point of order in the National Assembly, he said the government of PTI had destroyed national economy and was ousted through legal and constitutional ways owing to its inefficiency, bad governance and wrong policies.

He proposed the current economic situation in the country should also be discussed in National Security Committee to identify those responsible for it. He said notice should also be taken of statements given by the PTI chief and former Minister for Interior, Sheikh Rashid Ahmed.

He said that former PM(Imran Khan) was maligning the national institutions and should be held accountable for his unjust criticism against the state institutions.

“I was trialed on alleged charges but I was innocent and faced the court proceedings as a law abiding citizen of the country. Imran Khan has crossed all limits while criticizing the state institutions which is reprimandable and the quarter concerned should take note of that” he added. 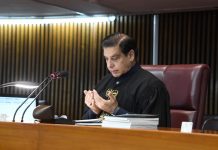 A man is pulling to load a camel on the delivery...