He added that export industries besides providing jobs, increasing economic volume and the precious foreign exchange will also ensure the access of “Made-in-Pakistan” brand in the international market.

The Prime Minister expressed these views while presiding over a review-meeting on foreign investment in export industries under CPEC.

The meeting was told that with the complete redressal of visa issues for Chinese officials coming to Pakistan under the CPEC, the Ministry of Interior was disposing of the new cases on daily basis, which was positively impacting the pace of CPEC.

The Board of Investment (BOI) briefed the meeting in detail about comprehensive strategy for the establishment of export industries in SEZs.

The meeting was apprised of the identification of possible foreign investors from China in different sectors and the incentives being offered to them for direct investment in Pakistan.

The meeting was told about the establishment of mobile assembly units by three big international mobile companies in Pakistan as well as their domestic consumption and the positive effects on exports.

Besides, the meeting was also briefed about the measures taken by the CPEC Authority, the Ministry of Industries and Production and BOI. 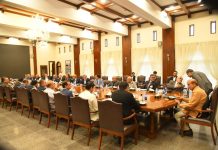