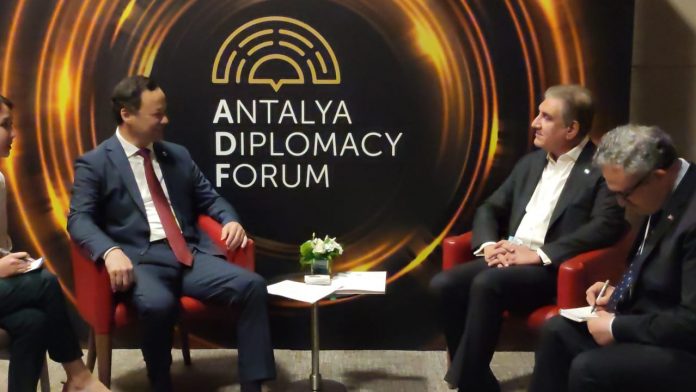 ISLAMABAD, June 18 (APP): Foreign Minister Makhdoom Shah Mahmood Qureshi had a bilateral meeting with his Kyrgyz counterpart Ruslan Kazakbaev on the sidelines of Antalya Diplomacy Forum in Turkey on Friday.

Foreign Minister Qureshi spoke highly of the historical relations between the two countries and their deep cultural linkages.

Issues relating to the welfare of Pakistani students and the expatriate community were also discussed.

Both sides expressed satisfaction at their ongoing collaboration at various regional and international fora.

He also highlighted the aspect of regional connectivity and integration as its important components and underlined shortest access to the sea for Central Asian states through Gawadar and Karachi ports.

The two Foreign Ministers agreed to remain in close contact to further strengthen joint efforts for enhanced cooperation in all spheres of common interest.