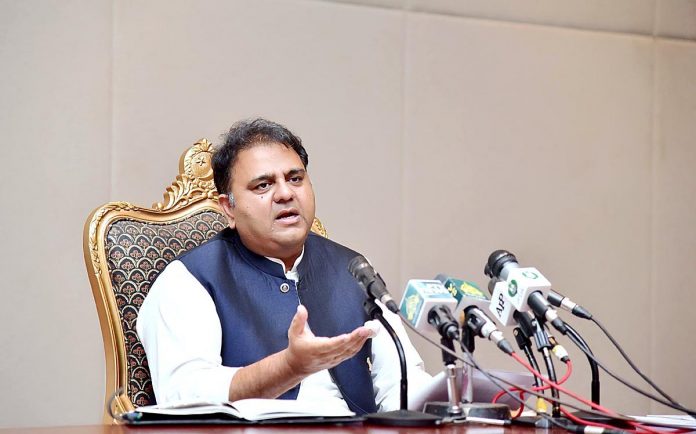 ISLAMABAD, Jul 27 (APP):Minister for Information and Broadcasting Fawad Chaudhry on Tuesday said the Federal Cabinet had approved the first-ever cyber security policy for better national security, and response to the looming threat of cyber warfare gaining roots across the globe.

Addressing a news conference after the cabinet meeting chaired by Prime Minister Imran Khan, he said the world was moving towards the cyber warfare at a rapid pace, and the government formulated the comprehensive policy in that regard, which was crucial to protect the cyber security regime, and electronic data of citizens.

Rubbishing the Pakistan Muslim League-Nawaz’s (PML-N) allegation of ‘rigging in the Azad Jammu and Kashmir elections, he said there was no possibility of fraud in the electoral process as the PML-N itself was in government there and had appointed the chief election commissioner.

The PML-N leaders should rather concede their defeat instead of crying foul by holding a press conference at the AJK prime minister’s office, he added.

At the outset of meeting, Fawad said the cabinet members congratulated Prime Minister Imran Khan over the Pakistan Tehreek-e-Insaf’s (PTI) ‘remarkable’ victory in the AJK elections. The cabinet appreciated the efforts of federal ministers Ali Amin Gandapur, Murad Saeed, Ali Muhammad Khan, and others in that regard.

The victory in AJK elections was, in fact, a manifestation of the people’s confidence in the leadership of Prime Minister Imran Khan, he added.

The minister said the cabinet was given a detailed briefing by Prime Minister’s Adviser on Parliamentary Affairs Babar Awan on the electoral reforms process.

He stressed that both the government and the opposition needed to build consensus on important national issues such as holding free, fair and transparent elections, which were vital for national development. Otherwise, the allegations of rigging would continue to be levelled by the losing parties after every election, he added.

He said it was astonishing that when the current opposition leaders got drubbing in the bye-polls, they created a hype of ‘rigging’ and if, otherwise, they claimed that the PTI government had lost the support of masses.

Fawad said the past governments used to misuse the official resources just to defeat the opposition candidates in the bye-elections, and it was only the PTI in the country’s history which did not resort to such practice. He cited his own defeat in the bye-poll held in his constituency (Jhelum) in the past, where the then ruling party’s candidate fully misused the government resources. 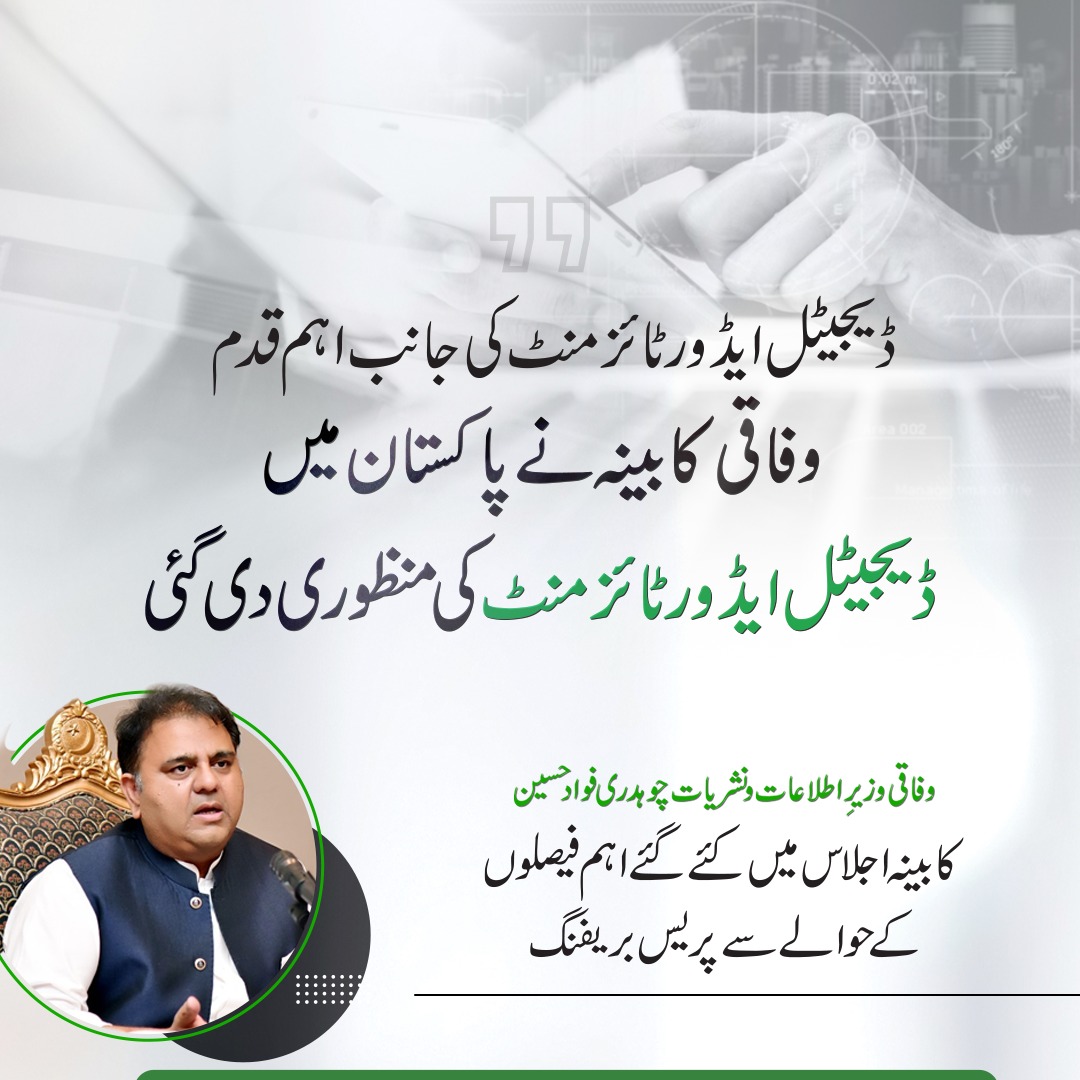 The minister said the government’s consultations with the opposition parties on electoral reforms were moving forward. There was no stalemate and the process would resume soon after the return of National Assembly Speaker Asad Qaiser from Azerbaijan where he along with a parliamentary delegation was attending a trilateral meeting of the speakers of the parliaments of Azerbaijan, Pakistan and Turkey.

He said a detailed report was also presented before the cabinet on the expenses being spent on the protocol of VIPs, including the president, prime minister, cabinet members, governors and chief ministers, and judiciary.

He said some Rs 700 million was being spent annually on the security of Federal Government dignitaries, Rs 2,529 million in Punjab and Rs 998 million in Khyber Pakhtunkhwa.

The prime minister, he said, had directed to formulate a new security mechanism in view of such an increase in the security expenditure of VIPs (Very Important Persons). A “Threat Assessment Committee” was being formed to formulate new security system, he added.

The minister quoted the prime minister as saying that the “protection of taxpayers’ money is the foremost responsibility of the government and the people should have confidence that their tax money is being used in a judicious manner”.

He said the cabinet issued directives to the Board of Investment to take necessary steps for repealing obsolete laws causing hurdles in investment process.

Chaudhry Fawad said Pakistan had made tremendous progress in creating ease of doing business, and more initiatives in that regard were in the offing.

Regretting the exploitation of local land owners at the hands of powerful, he said the cabinet formed a committee headed by the Secretary Interior on the issue of E-11 Sector’s development.

The prime minister directed that the poor should be provided protection of the law as the powerful and influential could protect their rights on their own, he added.

The minister said the cabinet also gave approval to the Advertisement Policy 2021, which envisaged issuance of ads to digital media as well. 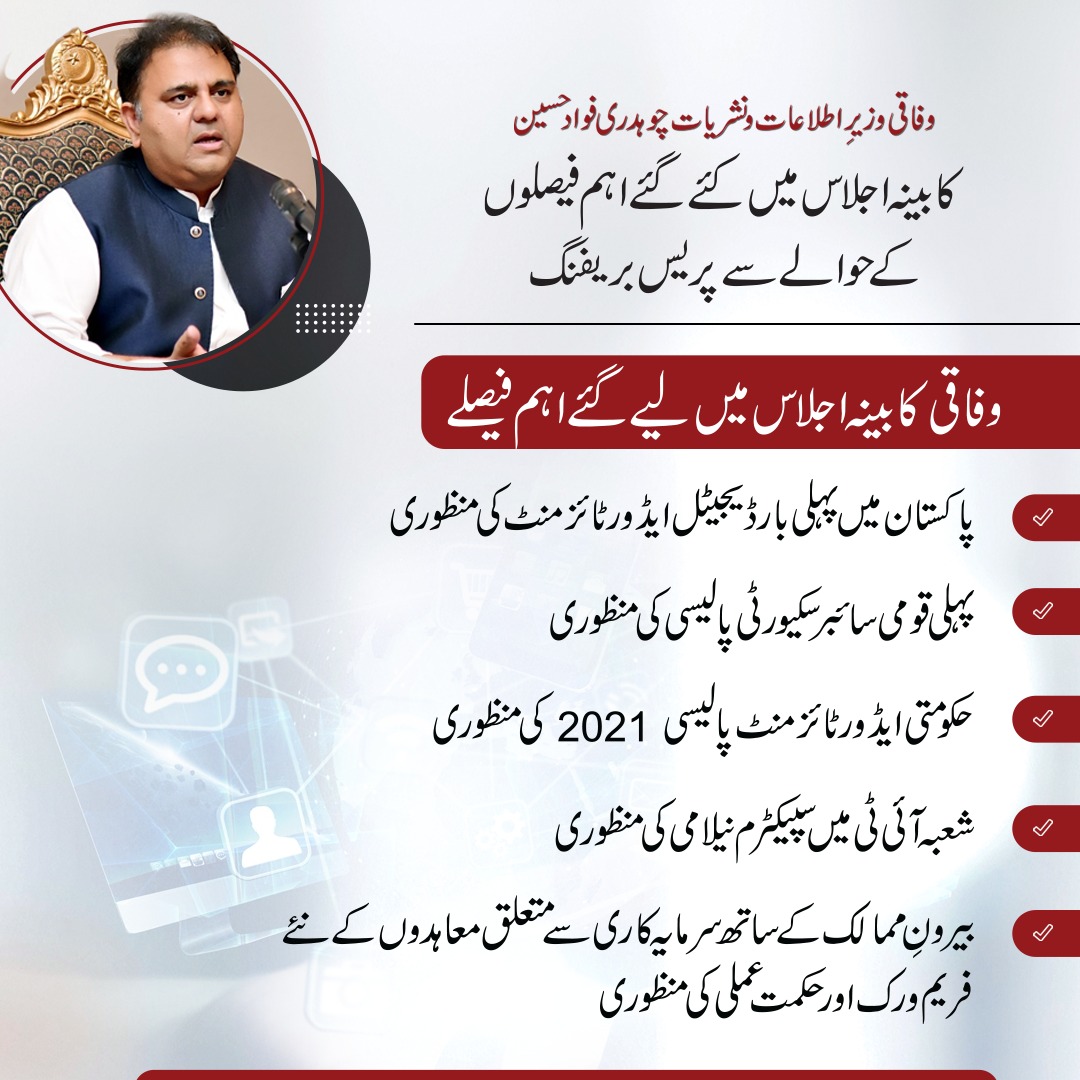 Presently, he said, there were no outstanding dues of the media against the Press Information Department (PID). However, certain media houses had not still paid salaries and other dues to their employees, and the worst affected among them were the technical staff like NLEs and cameramen, he added.

The present government, he said, had taken steps to overcome the problem and necessary legislation would also be done in that regard soon, the minister said.

Fawad said the PID had become paperless, whereas advertisements and payment of dues details were now available on its website.

It was informed that so far 650,000 vaccine jabs a day were being administered and the plan was to achieve the target of one million doses per day.

He said various big institutions were being asked to make arrangements for vaccination of their employees. Vaccination had been made mandatory for the employees of government corporations. 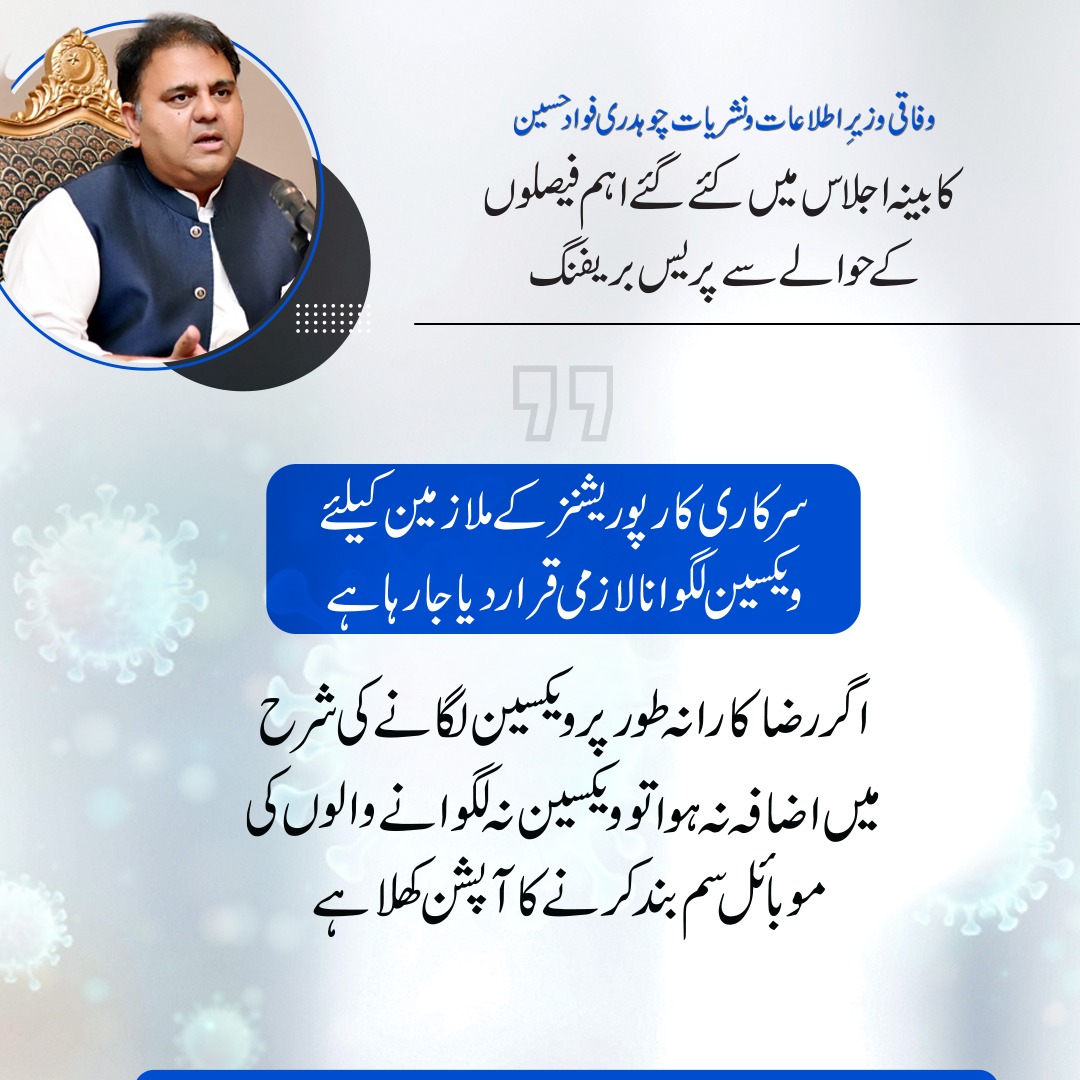 If the rate of voluntary vaccination did not increase, the government the option to block the mobile SIMs of those not getting jabs, he warned.

Earlier, he said the cabinet offered Fateha for the departed souls of four army personnel and PTI activists martyred on the election day in AJK and also directed for provision of the best possible medical treatment to the injured.

On the occasion, he said the prime minister said justice should be provided to the slain PTI workers’ families and the culprits should be brought to book.

Responding to a question, he said following the PTI’s landslide victory in the AJK elections, Prime Minister Imran Khan would announce the new leadership of Azad Jammu and Kashmir (AJK) by the second week of August. Regarding the appointment of two new members of Election Commission of Pakistan (ECP), he categorically denied any deadlock between the government and the opposition on the matter. Preliminary consultations had already started within the PTI and after finalization of the names of candidates, the list would be sent to the Leader of the Opposition in National Assembly Shehbaz Sharif for his consent, he added.

To another question, he said a professional committee comprising bureaucrats would decide about distributing advertisements to the digital media in a transparent manner.

He said the investigations of Noor Muqaddam murder case were continuing in the right direction and the culprits would not escape punishment. The culprits of such heinous crimes had already been punished.

He said Pakistan was the safest country. Such cases occurred in every society, however, the ratio of such crimes in Pakistan was much lower as comparing to other countries. Efforts were underway to make the county safer and secure, he added.

To another question, he said the government had decided to thoroughly investigate the attempted Indian cyber espionage attacks on mobile phones and gadgets of its top officials, and the findings would be shared with the United Nations, which hopefully would take action over it. 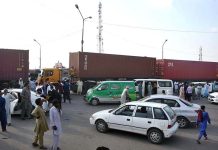 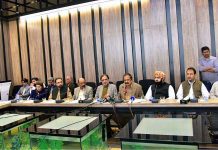 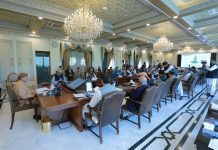 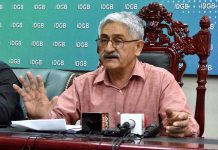 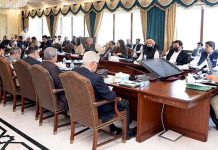 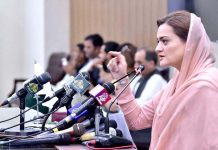 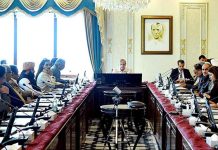 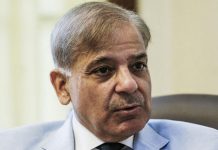 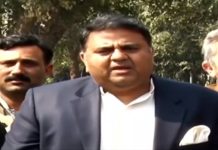