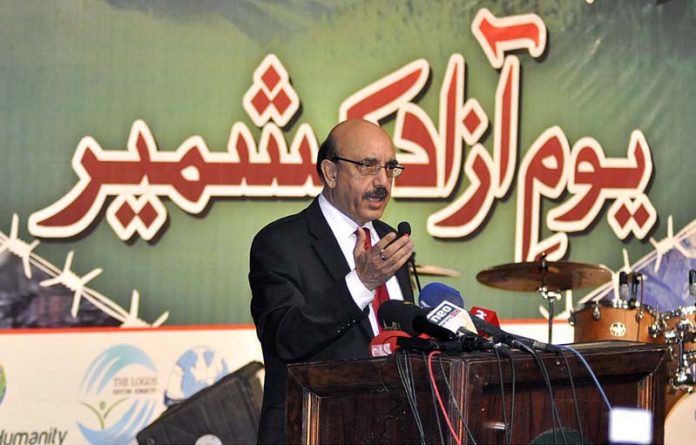 As per AJK President office, Sardar Masood said that such false flag by India was being feared since Pakistan has brought to light the irrefutable proofs of Indian terrorism inside Pakistan .

“Indian leaders openly hatching plots against Pakistan and AJK, there are signs that they’re preparing for a false flag operation or open aggression because India’s involvement in terrorism has been made public by Pakistan with evidence,” the President said.

He said that the time is over to maligning Pakistan and the Kashmir liberation movement by levelling concocted allegations.

The president said that the international community has now fully realized that India which has engaged its one million troops for ethnic cleansing of the Kashmiri people is perpetrating state terrorism in occupied Jammu Kashmir.

Khan maintained that in the past, India has committed many such ugly acts to hide its terrorism and to divert the attention of the international community from the real issue.

“Whether it is the Chattisinghpura massacre or the incidents in Uri, Pathankot and Pulwama, India’s history are full of false allegations and fraud. Modi and all Indian rulers have miserably failed in their conspiracies against Pakistan and the Kashmiri people,” he added.

“India’s BJP-RSS propagandists and publicists are harvesting and manipulating (false data) to negatively profile Kashmiris and Pakistan. We have to counter this campaign that first demonizes and vilifies Muslims and then weaponizes it to incite hatred and violence against them.” he said.

The AJK President said that it is obligatory for the international community not to let India hide its black face behind falsehood and shrewdness, hold it accountable for its terrorism, enmity against mankind and the war crimes, and administer justice to the Kashmiri people. “If India is not held accountable, no one will be able to save the world from becoming a jungle where only falsehood and injustice prevails,” he added.

Strongly condemning operation of the Indian government and the military against the Bakarwal Gujjar community in occupied Kashmir, Sardar Masood Khan said that these people living with their cattle in the forests and mountains for thousands of years are being punished for being Muslims.

He also described the holding of district development council elections by the Indian government as a drama, and said that these sham elections will be neither impartial nor transparent nor will these provide any relief to the people of occupied Kashmir.
Actually, he said that India is holding these elections just to get its illegal actions in occupied Kashmir validated and to deceive the world.

Meanwhile, AJK President also strongly condemned Indian firing at a wedding ceremony in Khuiratta sector of AJK’s Kotli district on Sunday, which resulted in injuring of 11 civilians including six women and three children besides causing destruction to the property of the civilian population.
Terming Indian India’s unprovoked firing as naked aggression, he said, India is deliberately targeting the civilian population on the Pakistani side of LoC to divert attention from the stiff resistance being offered by brave people in IIOJK.