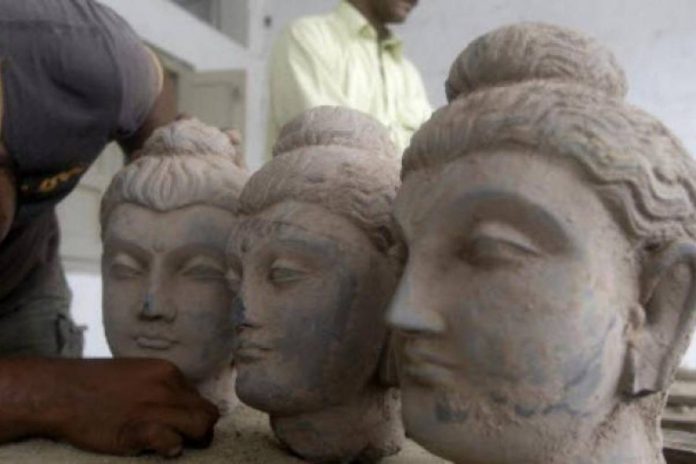 The announcement said that 187 of the artifacts were recovered from Kapoor, identifying him as “one of the world’s most prolific antiquities traffickers.”

Thanking them for their “tremendous” amount of work in recovering the stolen antiquities, Ayesha Ali said, “We cherish our rich cultural heritage and we are happy to receive the treasurers back, which will be returned to Pakistani museums to be seen by hundreds and thousands of Pakistanis and others from around the world.”

Pakistan, she said, continues to encourage tourism along the ancient routes and centers of this art.

“On behalf of the people of Pakistan,” the consul general added, “please accept our huge gratitude for the tremendous work you do”.

The art pieces and artifacts included a Gandharan statute depicting a maitreya, or an enlightened form of the Buddha, which was looted from Pakistan and smuggled into New York during the 1990s.

Kapoor had owned an art gallery in New York called Art of the Past and a side business that specialized in selling antiquities from southeast Asia when he was accused of smuggling and selling stolen artifacts.

The antiquities were looted from a Neolithic archaeological site in Pakistan before being trafficked to New York. They were placed in a storage unit rented by agents of the Art of the Past until their seizure by U.S. authorities this year.

The archaeological site of Mehrgarh in Pakistan was discovered by archaeologists in 1974 and subsequently faced looting.

Kapoor was arrested in October 2011 at Frankfurt International Airport in Germany and extradited the following year to India on charges of having received stolen artifacts from temples in southern India, which he then sold to museums around the world, according to the announcement.

He has been held in an Indian jail ever since and was convicted of receiving stolen property, habitually dealing in stolen property, and conspiracy by a special court in Kumbakonam, India, last week. He was sentenced to 13 years in prison and ordered to pay a fine.

In the United States, the office of former Manhattan District Attorney Cyrus Vance Jr. obtained a warrant for Kapoor’s arrest in 2012 and he was formally indicted with seven co-defendants in a conspiracy to traffic the stolen antiquities in 2019.

Snjeeve Asokan, a co-defendant in the New York case against Kapoor, was also convicted and sentenced by the Indian court.

Prosecutors in the U.S. also previously sought to have Kapoor extradited and said they are “continuing to pursue prosecution.”

Two other co-defendants in the New York case have already been convicted, including Richard Salmon in 2020 and Neil Perry in 2021. Three other co-conspirators were also convicted.

“Subhash Kapoor was one of the world’s most prolific antiquities traffickers, yet thanks to the work of our dedicated investigators and analysts, we have been able to recover thousands of pieces looted by his network,” Manhattan District Attorney Bragg said.

“We will continue to pursue full accountability against Mr. Kapoor and his co-conspirators, who showed a blatant disregard for the cultural and historic significant of these antiquities.”

In her remarks, Consul General Ayesha Ali also thanked the District Attorney and his team for their personal vigilance and commitment in returning the stolen artifacts as well as the Department of Homeland Security for its vital role in ensuring that the criminal networks led by Subash Kapoor and others engaged in theft and smuggling of valuable cultural heritage are being purused and prosecuted.

“It is never an easy task and involves teamwork, very painstaking investigation and personal leadership,” she added.