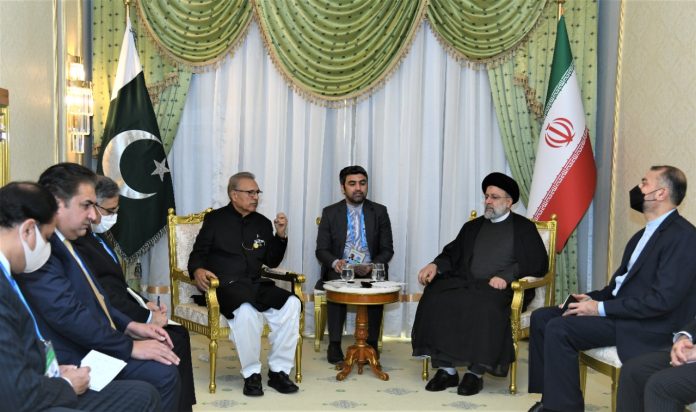 The bilateral ties were discussed in a meeting between President Dr Arif Alvi and his Iranian counterpart Seyed Ebrahim Raisi, on the sidelines of the 15th Summit of the Economic Cooperation Organization (ECO) in Ashgabat.

President Alvi congratulated President Raisi on assuming the office of the President of Iran after his victory in recent elections.

He underlined that Pakistan considered Iran as an important Muslim neighbour and brother based on deep-rooted historical, linguistic, religious and cultural linkages between the two countries.

The two leaders expressed satisfaction on the regular high-level interactions which had reinforced different avenues of bilateral cooperation.

He expressed satisfaction at the recent operationalization of International Road Transport (TIR) shipments from Pakistan to Turkey and Azerbaijan, which would be beneficial for the entire ECO region.

On regional situation, particularly in the context of Afghanistan, President Alvi noted the increased convergence of views among the neighbouring countries.

He emphasised the need for closely coordinated approach to achieve shared objectives of a peaceful, stable and prosperous Afghanistan.

He laid emphasis on urgent provision of humanitarian and economic assistance to alleviate the sufferings of people of Afghanistan. He stressed on the de-freezing of Afghanistan’s financial assets in this respect.

President Arif Alvi reiterated the invitation for a bilateral visit to Pakistan to President Raisi at his earliest convenience.

The two leaders agreed to stay engaged on all issues of mutual interest.