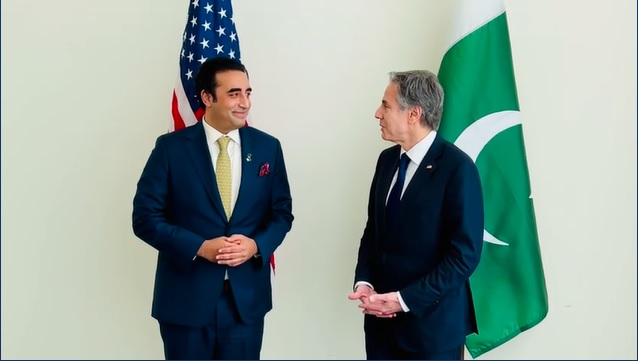 UNITED NATIONS, May 18 (APP): Pakistan’s Foreign Minister Bilawal Bhutto Zardari Wednesday discussed with US Secretary of State Antony Blinken a wide range of global and regional issues at their first face-to-face meeting, including the food security crisis, that is exacerbated by the ongoing conflict in Ukraine.

The 45-minute meeting, held at the United Nations, was “cordial and positive”, Bhutto-Zardari told APP correspondent in a brief interview.

The foreign minister said he spoke about the acute challenges that Pakistan was facing in security of food, water and energy stemming from a whole host of issues ranging from climate change to “issues in neighborhood”.

Wednesday’s meeting followed May 6 phone call by Blinken to Bhutto-Zardari during which the top US diplomat reiterated the desire to strengthen broad-based US-Pakistan bilateral relationship.

Secretary Blinken had also highlighted ongoing engagement between the two countries on trade and investment, climate, energy, health, and education.

On Wednesday, Bilawal-Bhutto told APP that Pakistan’s new government believed in “trade, not aid” as the two countries rebuild their relations, and that was the message he conveyed to Blinken.

Pakistan, he said, believed in engagement and will continue to advance its relations with all countries, and he welcome US initiative to convene the food security meeting.

Earlier, welcoming his Pakistani counterpart, Secretary Blinken said, “I’m grateful for Pakistan’s participation (in food security meeting) and engagement on this to look at concrete steps we can take to address the food insecurity issues, to help people in need around the world.

“But beyond that, this is an important opportunity for us to talk about the many issues we’re working together. We want to focus on the work we’re doing to strengthen economic and commercial ties between the United States and Pakistan, of course, focused on regional security. “

Noting that Pakistan is now in the chairmanship of the Group of 77 (developing countries), he said the United States is looking forward to strengthening its relations and open dialogue communication with the group.

An official press release on the Bliken-Bilawal talks is expected later.