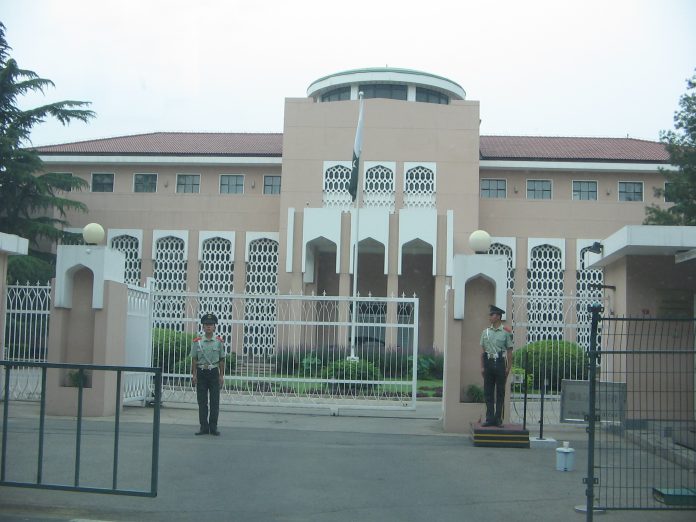 BEIJING, Aug 13 (APP): Pakistan Embassy Beijing on Saturday organized a Food and Cultural Festival at the state-of-the-art Silk Road Art and Cultural Centre in the city of Langfang, an hour drive from Beijing, to celebrate the 75th Independence Anniversary of Pakistan.

The opening ceremony was attended by over 300 people including Chinese dignitaries, government officials, business executives, members of the diplomatic corps, media representatives and Pakistani community.

He highlighted the strengths of Pakistan as an investment and tourist destination and invited people of China to visit Pakistan next year being celebrated as Year of Tourism Exchanges.

The ambassador also spoke at length about the special friendship and iron brotherhood between China and Pakistan which is time tested.

He hoped this festival would help in promoting cultural cooperation and people to people exchanges between the two countries.

President of China-Pakistan Friendship Association, Ambassador Sha Zukang said that Pakistan and China have a long history of friendly relations and both the countries have been helping each other at difficult times.

He expressed the confidence that the all-weather friendship between the two people would further deepen in future.

CEO of Ennova Culture Group, Ms Li Xiaofei welcomed the audience and threw light on the importance of the festival.

A number of activities were being organized as a part of this festival, including cultural performances, display of Pakistani products and handicrafts, photo exhibition, children games, and famous Pakistani dishes.

A special children art activity to make a large painting symbolizing China-Pakistan friendship was held on the occasion.

Two famous movies ‘Parvaz hai Janoon’ and animated movie ‘Allahyar’ and legends of ‘Markhor’ are also being shown at the festival.