UNITED NATIONS, May 04:UN Secretary-General Antonio Guterres has called for respecting the rights and protecting journalists and media workers who he said are facing “increasing politicization” of their work and growing threats to their freedom to simply do their jobs.

Marking World Press Freedom Day on Tuesday, he said that the day shines a spotlight on the essential work they do, bringing those in power to account, with transparency, “often at great person risk”.

“Throughout the COVID-19 pandemic, many media workers have been on the frontlines, providing accurate, science-based reporting to inform decision-makers and save lives”, the secretary-general said.

“At the same time, journalists who cover climate, biodiversity and pollution have succeeded in bringing global attention to this triple planetary crisis,” he said.

But the threats to their freedom to go about their reporting and story-telling fairly and accurately, are multiplying daily.

“From global health to the climate crisis, corruption, and human rights abuses, they face increased politicization of their work and attempts to silence them from many sides,” Guterres said.

“Digital technology has democratized access to information. But it has also created serious challenges.”

The UN chief noted that many social media platforms make their money not through increasing access to fact-based reporting, but on boosting engagement, “which often means provoking outrage, and spreading lies.”

“Media workers in war zones are threatened not only by bombs and bullets, but by the weapons of falsification and disinformation that accompany modern warfare. They may be attacked as the enemy, accused of espionage, detained, or killed, simply for doing their jobs.”

Guterres said that digital technology, was also making censorship easier for authoritarian governments and others, seeking to suppress the truth, with many journalists and editors facing the prospect of their work being taken offline on a daily basis.

Digital technology is also creating new “channels for oppression and abuse”, with women journalists “at particular risk” of online harassment and violence.

“The methods and tools change, but the goal of discrediting the media and covering up the truth remains the same as ever”, said the UN chief, leading to citizens who live in societies without free media, being “manipulated in horrifying ways.”

Ten years ago, the UN established a Plan of Action on the Safety of Journalists, to protect media workers and end impunity for crimes committed against them, and the UN is continuing to fight to protect their rights.

“On World Press Freedom Day, we honour the essential work of the media in speaking truth to power, exposing lies, and building strong, resilient institutions and societies, the secretary-general said.

“We call on governments, media organizations and technology companies everywhere to support these crucial efforts.

This year’s World Press Freedom Day Global Conference, began on Monday, and will run until 5 May in Punta Del Este, Uruguay, built around the theme Journalism under Digital Siege.

Participants will discuss the impact of the digital era on freedom of expression, the safety of journalists, access to information and privacy. World Press Freedom Day events will reunite relevant stakeholders such as policymakers, journalists, media representatives, activists, cybersecurity managers and legal experts to explore these issues and develop concrete solutions to address the threats posed to press freedom and privacy in the digital age.

Speaking on Tuesday, UN rights chief Michelle Bachelet has paid tribute to courageous journalists who continue to risk their lives for their work.

Many reporters have “little choice but to work amidst ever-increasing harassment, intimidation, surveillance and risk to their lives and livelihoods”, Ms. Bachelet insisted, at a ceremony in Geneva.

“They do so for the sake of all of us. So that we have access to free, accurate and independent information. So that we can live in just and peaceful societies”, she added. “Their work helps build the foundation for some of the fundamental human rights we should all enjoy: freedom of opinion, information and expression.”

It is crucial that journalists continue to expose atrocities, the UN High Commissioner for Human Rights noted, her comments following her condemnation of deadly communal violence in Sudan’s Darfur, and reported summary executions of civilians in Bucha in Ukraine.

Despite the crucial role of journalists in society, Ms. Bachelet warned that they continue face “grave threat(s)”, even in supposedly safe and democratic places, before noting that 293 media professionals were killed worldwide last year. 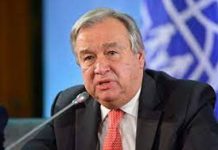 A vendor off loads green fodder from the delivery vehicle at...