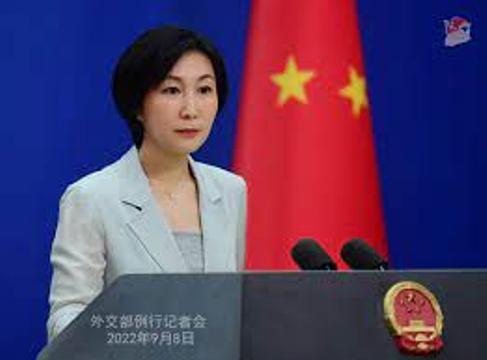 FM Bhutto’s comments attest to mutual trust and friendship between our two countries, Mao Ning said in response to a question during her regular briefing.

According to reports, Foreign Minister Bhutto took an interview with Foreign Policy. In response to comment that China had not come to Pakistan’s aid in a big way this year when flood hit, he said it was absolutely incorrect.
The spokesperson said that China and Pakistan were linked by mountain and rivers and both the countries shared the same future.

From the major floods in 2010 in Pak, 2021 locust disaster, Wenchuan earthquake 2008, Luding earthquake, the two countries have always stood together in dealing with natural disasters and in overcoming economic and financial difficulties, she added.

Mao Ning said that China had always been among the first to help. Since the flood hit Pak this time, China had acted promptly to offer strong assistance.

The Chinese govt has decided to provide 400 million RMB of humanitarian assistance to Pakistan. We lost no time in bringing together all the reserve supplies under the China Pakistan Economic Corridor (CPEC) social welfare cooperation framework, she added.

To help Pakistan, she said that China offered emergency cash assistance and shared real time weather forecast with it. âBy air, land and sea, we sent tents, vegetables and other supplies to Pakistan.

Mao Ning said that that the Chinese government and the entire society worked together to help. Chinese enterprises and charitable people and sub-national organizations and governments raised more than 125 million RMB donation and supplies to help Pakistan and civil rescue teams also went to Pakistan to help. Even primary school students donated their pocket money to help.

All this show that the two countries are a community of shared future sharing will and woe and our friendship is deeply rooted in our people’s heart and has strong vitality, she added.

The spokesperson informed that currently the two sides were working in close coordination to implement follow-up work and reconstruction.

We stand ready to further enhance our cooperation, deepen our iron-clad friendship, she added.
Mao Ning believed that Pakistani govt and people would prevail over the disaster and rebuild their homes soon.