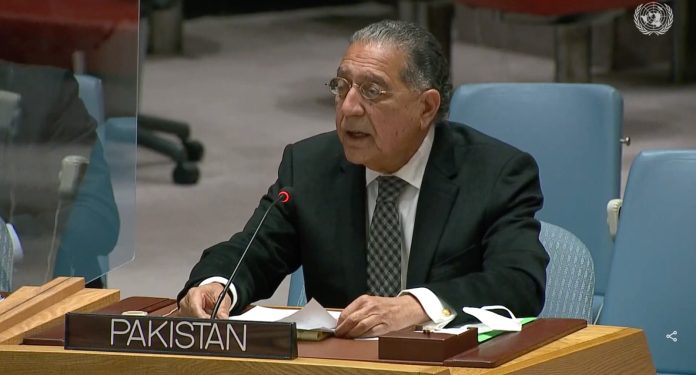 UNITED NATIONS, Nov 18 (APP):Pakistan Wednesday focused the world community’s attention to the dire humanitarian and economic crisis facing Afghanistan, and fervently called for lifting the “unjustified freeze” on the war-torn country’s assets to enable it deal with the critical situation.

Speaking in the 15-member Council’s meeting on Afghanistan, the Pakistani envoy warned that the consequences of a major humanitarian crisis and economic collapse there would be horrendous — massive human suffering, the outflow of millions of more Afghan refugees, the likelihood of chaos and further conflict and reinforcement of Da’esh and other terrorist groups.

“When the millions of Afghan refugees start flowing across our borders, we who are hosting 4 million Afghan refugees already will not be able to take more, they will have to go elsewhere,” Ambassador Akram said.

“These are consequences which the international community must avoid.”
At the outset, Deborah Lyons, UN Special Representative and Head of the UN Assistance Mission in Afghanistan (UNAMA) briefed the Council on the developments in the country since the Taliban takeover in August.

Despite an improvement in the security situation, Ms. Lyons said, Afghans feel abandoned by the international community and anxious about their new leadership.

In his remarks, the Pakistani envoy also said that the security situation in Afghanistan had vastly improved.

“The interim government has allowed and facilitated the provision of direct assistance to the Afghan people, including through women, aid workers,” he said, adding that it is responding positively to engagement with the international community, including the neighbouring countries.

“The glass may yet be half full; yet engagement has yielded progress on several concerns of the international community,” Ambassador Akram said, pointing out that girl schools up to the level of grade six are open as are universities, with women attending based in segregated classes. Secondary school were not yet open because of lack of teachers and the ability to pay them, he said, citing information given by the Taliban.

At the same time, he warned about some in the region who continue to play the role of a “spoiler” in Afghanistan, saying they are still involved in schemes to destabilize the country. “They must be isolated and exposed.”

Ambassador Akram also objected to the participation in Wednesday’s meeting of former Afghan Ambassador, Ghulam Isaczai, an appointee of the Ashraf Ghani’s regime, saying the Security Council would benefit from hearing those who are actually ruling in Kabul rather than an ex-parte discussion.

Underscoring the immediate challenge — humanitarian and economic crisis — the Pakistani envoy said commend the efforts of the United Nations Secretary-General and the UN and international organizations – WFP, OCHA, UNDP, UNICEF, WHO, FAO and others – in responding to the needs of the Afghan people, having received “excellent cooperation” from the government in Kabul in doing so.

“But, more help is needed: to avoid a humanitarian disaster and an economic collapse,” he said.

“Humanitarian organizations are also facing practical challenges due to the existence of bilateral and Security Council sanctions,” Ambassador Akram said, emphasizing that humanitarian assistance must be unconditional.

“I am therefore shocked at the demands here (in the Council) to leverage humanitarian assistance to Afghanistan in order to extract political concessions — this is contrary to international law.

“We hope that the appropriate decisions will be made to enable the UN and other organizations to overcome their practical problems that are impeding the critically needed assistance to the Afghan people,” he added.

Pakistan, he said, is doing all it can, having committed $30 million in assistance to Afghanistan, as wheat, rice, medical supplies and other essential items are being sent there.

“We have lifted duties on imports of Afghan commodities. We are facilitating transit trade; providing essential medicines, refurbishing Afghan hospitals.

“Pakistan is also facilitating the WFP’s delivery of 10,000 tons of wheat flour, and a humanitarian air service has been set up – an air bridge – between Islamabad and Kabul.”

During the recent visit of the Afghan delegation, led by the acting Foreign Minister Amir Khan Muttaqi, Pakistan agreed to provide training for doctors, nurses and paramedics, in ATC (air traffic control), aviation, safety and other steps to help stabilize Afghanistan’s economic governance, he told the Council.

Pakistan had also initiated the platform of the six neighbouring countries plus Russia which has met twice and will meet again early next year in China to promote a regional consensus aimed at normalizing the situation in Afghanistan, especially through economic integration and connectivity.

The Extended Troika grouping of China, Pakistan, Russia and the US met last week in Islamabad and also interacted with visiting Muttaqi. The meeting conveyed the expectations of the members of the Extended Troika on: inclusivity; human rights; girls education and women’s participation; prevention of vengeful acts against former government officials; elimination of the presence of terrorist organizations within Afghanistan and controlling drug trafficking.

For his part, he said, the acting Foreign Minister of Afghanistan conveyed that the authorities in Kabul have disavowed revenge and announced an amnesty for its former opponents and functionaries who are now incorporated in the governance structures and Ministries in Kabul.

The interim government has also reaffirmed assurances in all formats that Afghanistan’s soil will not be used against any country; that it will take effective action against Daesh/IS-K. It has sought assistance in countering the menace of drug trafficking. It has also called for unfreezing of Afghanistan’s assets.

“The process of engagement with the interim government in Kabul has produced progress towards the objectives and expectations of the international community,” Ambassador Akram said, adding that it is through such further engagement and dialogue – rather than coercion – that the international community will be able to advance its desire for an inclusive government, respect for human rights, especially the rights of women, and effective counter-terrorism.

“While pressing its concerns, the international community must also remain responsive and realistic, responsive to Afghanistan’s humanitarian and economic needs, its cultural, historical circumstances,” he said, suggesting that roadmap that would lead eventually to international acceptance and eventual recognition and representation of the new government at the United Nations.

“After 40 years, there is an opportunity for peace throughout Afghanistan and opportunity to root out terrorism from there,” the Pakistani envoy told delegates.

“This opportunity must not be lost at the altar of ego, revenge or disappointment, much less allowed to be sabotaged by those who see personal or strategic gain in continued conflict and chaos in Afghanistan.” 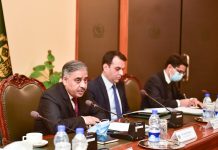