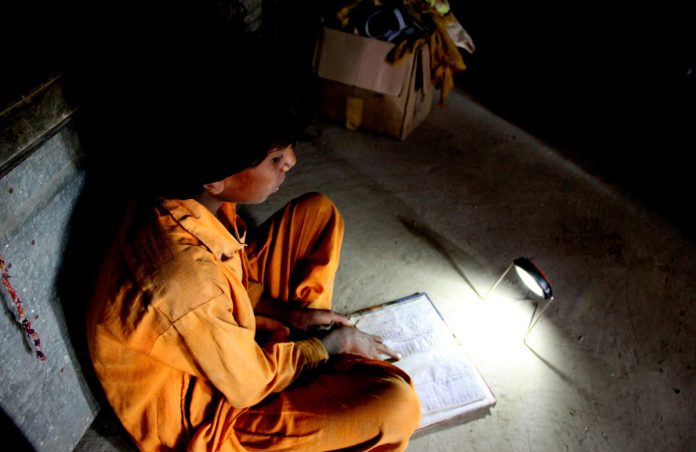 ISLAMABAD, May 15 (APP): Despite having a 38,000 MW power generation capacity, people had to bear the brunt of prolonged power outages across the country during the last half of April primarily due to the mismanagement of the then government of Pakistan Tehreek-e-Insaf (PTI).

The frequent power disruption forced people to recall the era before 2013 during which they had suffered unprecedented load-shedding due to the acute energy crisis. However, when Pakistan Muslim League (PML-N) came into power in 2013, it has revitalized the electricity sector and overcome the crisis through concerted efforts, materializing the dream of zero load-shedding in the country by successfully adding around 12,000 MW to the national grid in a short span of time

Commenting on the sudden power outages in April, Minister for Energy Engineer Khurram Dastgir said that lack of fuel supply and closure of power plants for maintenance were the main reasons behind the load-shedding across the country.

Several power plants with accumulative capacities of 5,739 MW were closed due to a shortage of fuel including RLNG, coal and furnace oil while some plants having 2,156 MW were shut down for routine and technical maintenance.

He said that power load-shedding had been curtailed since May 1 after increased fuel supply and plants’ maintenance. “The power plants have resumed getting RLNG supply while the required quantity of furnace oil has also been made available from May 2 to add more generation to the national grid system,” the minister observed.

He said although harsh weather during April caused a sudden increase in the power demand owing to urgent measures taken on the directives of Prime Minister Shehbaz Sharif has helped improved power generation.

The past government showed negligence and did not timely arrange fuel for the power plants that caused power outages, he said.

However, the incumbent coalition government under the leadership of Shehbaz Sharif added over 2500 MW to the national grid system in a week. An amount of Rs 108 billion would be needed till May 25, Rs 136 billion till June 7 and Rs 85 billion till June 15 for the power sector to cope with the load-shedding crisis, he added.

Recalling the PML-N government’s past tenure, Khurram Dastgir said there was zero load-shedding in the country on completion of five years tenure of their government on May 31, 2018. The circular debt which now had surged to Rs 2460 billion was only Rs 1060 billion during the PML-N past tenure, he said.

Similarly, Adviser to the Prime Minister on Political and Public Affairs, Engineer Amir Muqam was of the view that the bad governance of former Prime Minister Imran Khan was behind the power load shedding and energy crisis in the country. Many people were worried about the hours-long outages during hot summer and the government had taken a principal decision to provide maximum relief to people.

Amir Muqam said that there were huge losses in almost every sector including energy generation due to the incompetence of the PTI government that led to increase load shedding.

He said the country had faced great developmental setbacks negatively impacting electricity, gas, and the economy while the social fabric was marred by the policies of the past incompetent rulers.

Muqam said that had gas and oil agreements been timely signed and power plants installed by Nawaz Sharif government properly looked after and run, the problem of load shedding would have not existed today.

Muqam, who is also PML-N’s KP-chapter President, said that a record 12,000MW of electricity was generated and added to the national grid during the tenure of former Prime Minister Nawaz Sharif.

For the first time, work on local Thar Coal based projects was started in the country during the period under review. Thar Coal power generation projects were started under the China Pakistan Economic Corridor, the Spokesperson said.

Around 660 MW Thar Coal power project is already supplying inexpensive electricity. Work on the 884 MW Sukki Kinari hydel project was started in 2018 which would start generation by 2024. Similarly, 720 MW Karrot was launched in 2017 and it would start supplying power to the national grid in July this year.

Various power projects under CPEC faced inordinate delay to the then government policies after 2018. Three power projects based on Thar Coal having 2000 MW capacity were also delayed.

Another important project of 1320 MW proposed at Thar Coal Block VI did not go ahead due to scuttle in government after 2018, the Spokesperson said.

Meanwhile, the Water and Power Development Authority (WAPDA) has also devised a comprehensive plan to increase hydel energy share from the existing 9406MW to 20,591MW by 2028-29.

Official sources told APP that the share of hydel energy would be added in two phases.

At present, the hydel share in the overall energy mix stood at 31 percent with an annual energy generation of 37 billion units.

The projects would also help bring around 20 million acres of virgin land under irrigated agriculture. The water storage would increase from 13 million acre-feet (MAF) to 24 MAF with an addition of 11.7 MAF that would help irrigate 1.6 million acres of land in the country.