PESHAWAR, Nov 21 (APP): With the start of winter season, the consumption of honey products have increased manifold in Khyber Pakhtunkhwa where most people made the world’s famous Pakistan’s ‘Bair and Palosa’ honey part of their diets to keep themselves healthy and warm besides avoiding chest related infections.

As chilly and misty conditions started prevailing in most parts of the province especially in rural areas around rivers Sindh, Kabul, Panjokra, Swat, Kunhar and Kurram, the honey’s demand has also increased where one kilogram Bair honey was being sold at Rs 1,500 to Rs 2,000 per kilogram and Palosa at Rs 600-700 per kg.

“I came from Nowshera district to buy 10 kg bottles of my favorite Bair honey for my family and relatives due to its excellent quality and numerous health benefits,” said Riaz-ul-Haq, a school teacher at Tarnab, the main hub of honey’s trade and business in Peshawar while talking to APP.

“For the last five years, I am coming to Tarnab to buy my favourite honey and send it to my married sisters living in Peshawar as ‘winter’ gift,” he said, adding Rs 50 per kg increase has been witnessed this year as compare to the last year that needed to be checked by the district administration.

Sher Zaman, General Secretary, All Pakistan Beekeepers and Exporters Association KP told the news agency that slight adjustment in prices of Bair and Palosa honey has been made owing to hike in fuels and transportation charges besides foreign made medicines and sugar. He said around 35,000 beekeepers including 7,500 registered were directly involved in this hard earned business while over 1.5 million people’s indirectly associated with it in KP.

“Beekeeping is a profitable business and any person with at least Rs 300,000 can easily purchase 50 bees boxes (colonies) to achieve up to 20 KG honey from each box twice a year,” he added.

After the decrease of population of Apis Flori and Apis Dorsata commonly known “Swat bees” due to erratic patterns of weather, 2010 floods and climate change, he said Apis mellifera was imported to Pakistan from Australia in 1977 owing to her speedy growth and increased honey production’s power.

“Mellifera produces 20 to 25 kg honey per colony (box) against six to eight kilogram by the native bees two times in a year. Apis Dorsata has an ability to produce 40 to 45 kg honey from each hive mostly in tall trees and buildings. Around 120,000 to 150,000 wild bees are busy in one meter-length and half-meter wide comb making on 120 degree angle,” said Director NTFP.

“Bees collect pollen and nectar within five-kilometer radius of their hives and majority prefer to get food while staying close to their combs. One bee produces 1/12th of a teaspoon of honey in her life and flapping their wings 11,000 times per minute besides using her tiny hairs to take pollen and stomach to carry 70mg nectar.”

He said about 60,000 bees in one box produce up to 20 kg honey. Two queens in a same colony cannot live together. In case of an emergence of a new Queen, the older one often leaves the box with 35 percent bees to avoid clash and forms its own comb,” he said.

Iftikhar said, “Honeybees are lifeline of Pakistan as they play 80pc role in pollination process besides making a significant contribution in food chain and life saving medicines.”

He said commercial production of Apis Malifra has been started in Pakistan and demands of our bair and palosa honey had increased manifold at international markets especially in Gulf because of its usage by many pharmaceuticals companies in medicines, cosmetics, sweets products and food processing industries due to its excellent quality.

He said Pakistan has all the potential to increase its production up to 70,000 metric tons with the same harvest per year by using modern agriculture techniques, trainings to beekeepers, standardization, effective marketing and certification of the product.

Director NTFP said about Rs 43 billion revenues can be generated and over 100,000 new jobs could be created after achieving the 70,000MT honey target. Sher Zaman said the PTI government’s flagship billions trees afforstration project (BTAP) has made positive impact on apiculture business in KP where numbers of bees flora plants had significantly enhanced after raising of 10 new jungles with a record plantation of 1.208 billion during 2014-17 and around 394 million plants during 2018-20 under 10 BTAP.

He urged the government to impose ban on cutting of bair and palosa trees on the pattern of Deodara and award strict punishment to timber mafia to save the little creature from extinction.

He said increased effects of climate change and excessive use of variety of poisonous pesticides on agriculture crops weakens bees and making them susceptible to various ailments. The introduction of national bee breeding program would help meet local demands for quality queens and efforts should be made to promote commercial beekeeping, apiculture’ products and services, he added.

As per MoU signed among various organizations, he said National Vocational and Technical Training Commission (NVTTC) would launch National Beekeepers Certification Program besides financial support to certified beekeepers through Kamyab Jawan Program while the Ministry of Science and Technology is responsible for certifying the produced honey.

Sponsored by National Disaster Risk Management Fund, he project is being executed by Ministry of Climate Change, Islamabad and PMAS-Arid Agriculture University Rawalpindi in all provinces of Pakistan. The three year project would be completed with an estimated cost of Rs500 million by 2023-24.

As many as 3,000 beginners’ beekeepers would be trained in the country through NAVTTC and 15,000 existing beekeepers to be provided soft loans from different banks. Beesflora enhancement and development of honey forests through 40 established nurseries each having 25,000 plants for producing one million honey plants would be achieved. He said plantation site at Karak and Kohat districts has been selected for sowing of Bees flora plants on 100 acres land.

Iftikhar Khalil said about 10percent bees flora plantations under 10BTAP would be achieved during next two years. Accredited bee product standardization lab at PMAS Arid Agriculture University at Rawalpindi would be established.

A new type of honey “Margalla” was introduced by Pakistan Council of Agriculture and Research (PCAR) mostly useful for asthma and allergy patients. “Bair and Kalongi” honey was also brought in markets for the first time of Pakistan.

Syed Ishtiaq Urmar, Provincial Minister for Environment, Forest and Wildlife told APP that plantation of Bair and Palosa plants was a major component of the 10-BTAP under which 5.240 million Bair plants would be planted in southern districts including Karak, Bannu, Lakki Marwat, Kohat, DI Khan and Koh e Suleman areas during next two years under the Prime Minister’s Billions Trees Honey Program.

The Minister said 7,000 bees’ boxes were distributed and 1,000 beginners’ beekeepers were trained during last three years in KP. He said the KP government intends to establish Accreditation Bees Product Standardization Laboratory-cum- Processing Unit at Tarnab Peshawar for which Rs10 million was allocated. 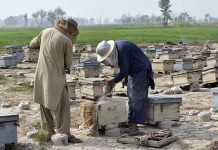 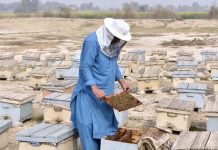