KARACHI, May 12 (APP): Sindh Chief Minister Syed Murad Ali Shah has asked for early resolving the issue of power outage in Sindh and urged the authorities for issuing necessary directives to resolve the issue of electricity load shedding in the province.
In a meeting with Federal Minister for Power Khurram Dastagir at CM House here Thursday to discuss the matters related to load shedding in the rural areas of the Sindh, the Chief Minister said that there were two serious issues in the rural areas of the province. “On the one hand there was power outage for over 12 hours in a day and on the other inflate bills are issued to the people,” he said.
The Federal Minister assured the Chief Minister that both the issues would be resolved on priority basis. In the first phase the duration of load shedding would be reduced and in the second it would be eliminated but it would take a little time.
Khurram Dastagir also said that he would talk to the Hesco and Sepco authorities to make proper meter reading and issue the power bills accordingly.
The Chief Minister also discussed issues of load shedding in the city with the federal minister. The Federal Minister told that he was holding a meeting with the K-Electric administration and would issue them necessary directives for improvement of their services.
The Chief Minister thanked the federal minister for visiting him at CM House and presented him his memento, Sindhi cap and Ajrak to his guest. 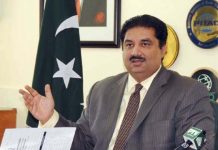 Reduction in power outage in next 10 days: Khurram Dastagir 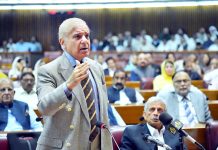