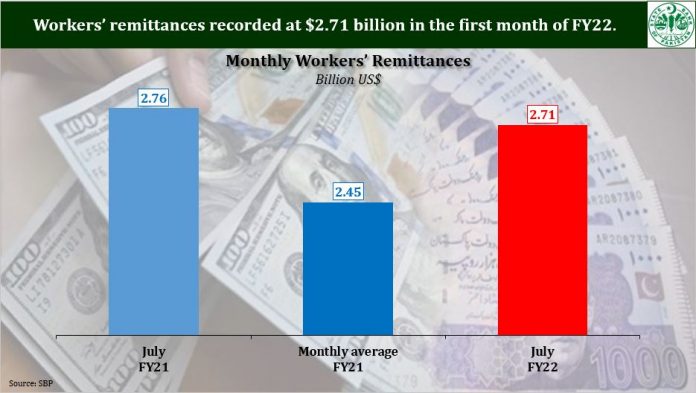 “With inflows of $ 2.71 billion in July 2021, workers’ remittances continued their strong trend, remaining above $2.0 billion for the 14th consecutive month,” said a statement issued by State Bank of Pakistan (SBP) on Tuesday.

This is the second-highest ever level of remittances reported in the month of July, it added.
In terms of growth, remittances increased by 0.7% over previous month and showed a decline of 2.1% over the same month last year. This marginal year on year decline was largely on account of Eid-ul-Adha, which resulted in fewer working days this July compared to last year.

The historic increase in the inflows has helped improving the country’s external sector position despite the challenging global economic conditions in the past year. Remittance inflows during July 2021 were mainly sourced from Saudi Arabia ($641million), United Arab Emirates ($531 million), United Kingdom ($393 million) and the United States ($312 million).

During the corresponding month, the overseas Pakistanis living in Bahrain sent $40.6 million, from Kuwait $77.4 million, from Qatar $78.4 million whereas $97.5 million were dispatched from Oman.

“Proactive policy measures by the Government and SBP to incentivize the use of formal channels, curtailed cross-border travel in the face of COVID-19, altruistic transfers to Pakistan amid the pandemic, and orderly foreign exchange market conditions have positively contributed towards the sustained improvement in remittance inflows since last year”, the statement added.