The National Assembly Standing Committee on Planning, Development and Special Initiatives was informed on Thursday that the government was engaged with the Chinese authorities for early conclusion of the financial negotiations on construction of Main Line (ML-1) railway project under China Pakistan Economic Corridor (CPEC), however in case, the negotiations fail, it would consider its Plan B to engage Russia or any other country to bring the investment for the multi-billion dollar project.

“We are 100 percent hopeful that the negotiations with China would yield positive results and work on the project would start soon, but if in any case, the talks remain unsuccessful, the government will go to other countries to materialize the project plan,” an official of the Planning Ministry Mr Imran, who looks after the railways matters told the committee.

The meeting held here presided over by the Committee Chairman Junaid Akbar was informed that the government was fully prepared to float the tender for the project as it had completed all the initial requirements including preliminary design and the feasibility reports.

The ministry official said the government to government framework agreement between Pakistan and China had also been signed so, “as soon as the loan agreement is signed, we will float the tenders for the project within 50 days”.

Member of the Committee MNA Agha Rafiullah, expressing dissatisfaction over the progress of mega CPEC project ML-1, said that so far there was zero progress on the project and urged to speed up the process so that physical work could be started as soon as possible.

The ML-1 project which was included among the early harvest projects of the CPEC, faced inordinate delay due to some technical differences between the two sides.

The meeting was informed that cost of original PC-1 of ML-1 project agreed during the previous government was US$9.172 billion, but the incumbent government negotiated and managed to slash the project cost by 25% to $6.8 billion.

It was further informed that the Chinese side was demanding that the project financing should be made totally in the Chinese currency RMB, however the financing committee from Pakistan side which had met for around fives times with the Chinese side so far, had proposed a mix of RMB and USD.

Similarly the Chinese side had demanded that the total tenor (length of time until a loan is due) of the loan should be 15-20 years while the financing committee had proposed 25 years’ tenor.

With regard to loan share, the financing committee had agreed to the Chinese demand of 85%.

The Chinese side is also demanding that 1% interest rate on the loan was too low while the financing committee had proposed to keep the rate less than other CPEC projects (average 2.38%).

The meeting was informed that under the project, the 1872 kilometers’ long railway track from Karachi to Peshawar would be up-graded and doubled and the new track would be laid to improve the speed limit of the passenger trains up to 160 kms per hour.

Discussing on the comparison of cost of road projects executed under National Highway Authority (NHA) between the period 2013-18 and 2018-21, member of the committee from PML-N Shaza Fatima, who virtually participated in the meeting, questioned that since the projects Lahore-Sialkot motorway (completed during previous government’s tenure) and the Kharian-Sialkot motorway (to be completed under current government) were being executed by the same contractor FWO, so how was it possible that the per kilometer cost was around one billion rupees less in the later project.

She said that in his every speech, the communication minister was claiming that his government managed to slash the per kilometer cost by a huge difference.

Colonel (retd) Aftab from FWO explained that there was huge difference between the two projects as the cost of embankment and protective work in Lahore-Sialkot motorway was high as compared to that in the Sialkot-Kharian motorway.

The official from NHA, however said there was no difference between the two projects as the both projects were in the same area and the government was keen to finalize minimum possible cost of the project.

With respect to Sukkur-Hyderabad motorway, Arbab Ali Dhakan from NHA informed that the land acquisition for the whole project was almost complete and physical work on it would complete soon. 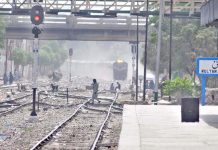 People sitting on railway track while a train approaching on the track, may cause any mishap and needs the attention of concerned authorities 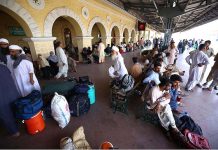