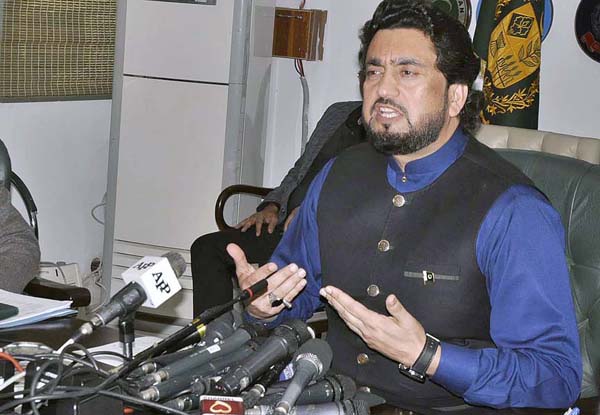 ISLAMABAD, Mar 21 (APP):Minister of State for Interior, Shehryar Khan Afridi Thursday emphasized that no one was above the law and constitution irrespective of status, saying firm action would be taken against those violating the law.

Addressing a press conference here, he said the acts of
Pakistan People Party (PPP) workers had been recorded
by cameras as violence could not be allowed for political purposes and
gains.
He said, “Whether the acts of PPP workers was pre-planned
or not, no one can hide himself from camera eye. We are monitoring the
recording and those involved in Wednesday’s violence shall be
taken to task.”
All political parties should take a proactive approach
to resolve all issues responsibly, Shehryar Afridi said, adding
that Pakistan was passing through a critical juncture when it
was facing fifth generation war and external hostilities by enemies.
The Minister said under the law, every citizens
had a right of protest but it should remain peaceful. In
Wednesday’s protest by Pakistan People Party workers,
the law was violated and even nine policemen and mediapersons
were also beaten.
“I condemns acts of PPP workers. It is my
moral, lawful and constitutional responsibility to ensure peace
in society and send those behind bars who took law in
their hands,” the Minister added.
He said, “No one will be allowed to blackmail the state.
Whosoever will act against the law, state would take action.”
Replying to a question, the Minister criticized the PPP
leadership, saying what type of culture they were promoting as
they called their workers before appearing for investigations
in National Accountability Bureau (NAB) on charges of
corruption.