ISLAMABAD, Nov 19 (APP): Minister of State for Information and Broadcasting Farrukh Habib Friday castigating Sindh government said that poverty and unemployment were rampant in the province despite thirteen years consecutive rule of Pakistan Peoples Party (PPP) in the province.

Responding to the statement of PPP Chairman Bilawal Bhutto Zardari, he said Sindh was still most deprived province where unemployment was galore as comparing to other provinces of the country.

The minister said that even today flour, wheat, sugar and other food items were being sold at the highest prices in Sindh as the provincial government was backing the dreaded profiteers and hoarders.

There was no governance in the province as the people had been left on the mercy of profiteers and tanker mafias, he said, adding the profitable Pakistan Steel Mill (PSM) was also turned in to a bankrupt entity by none other than Asif Ali Zardari and his henchmen as they looted it in a merciless way.

Various mafias were being supported by the provincial government, he said adding that due to incompetence of PPP government, a 20 kg bag of flour was being sold at Rs 1,100 in Punjab as comparing to Rs 1,500 per bag in Sindh. The corrupt rulers of Sindh had devoured wheat worth billions of rupees, the minister added.

He said on being caught red handed, the PPP government said Rs 14 billion wheat was eaten by rats.

He advised Bilawal Zardari to pay attention to the Sindh government so that they could breathe a sigh of relief and shun criticism for the sake of criticism.

The minister said PPP had already become a regional party due to its policies and rampant corruption.
Pakistan Television (PTV) and other state institutions were ruined by inducting inept political cronies by past regimes, pushing the institutions to bankruptcy, he added.

He said the Pakistan Tehreek-e-Insaf government worked day and night to turn the state institution in to profitable entities. PTV had earned Rs 1.30 billion profit this year which was in Rs 450 million losses in 2017, he added.

In contrary, Prime Minister Imran Khan had provided meaningful relief to poor segment of the society, he added.

The minister said the government had started ‘Ehsaas’ programme for the poor and deserving, adding the prime minister had ensured provision of house for the house less.

PTI had created millions of job opportunities in every sector including in construction and water resources, he added.

He was of the view that the manifesto of Zardari and company was to promote corruption.
The corrupt people were terrified due to Prime Minister Imran’s strict measures to check corruption from the country, he added.

He said the corrupt people had one common agenda and desire to eliminate corruption cases against them by giving National Reconciliation Ordinance (NRO) like concessions.

He said they had the same agenda and desire that somehow all cases of corruption be eliminated and they would be given NRO.

The people knew very well that the PPP preferred personal development over economic development as their politics started and ended with opening fake accounts, resorting to money laundering and corruption, he added.

The minister said Sindh government had refused to contribute in ‘Ehsaas Ration’ programme.

The total allocations for Benazir Income Support Program were only Rs 70 billion, whereas the incumbent government had allocated Rs 260 billion for Ehsaas program, he added. 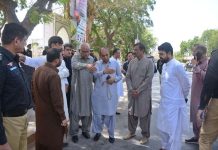