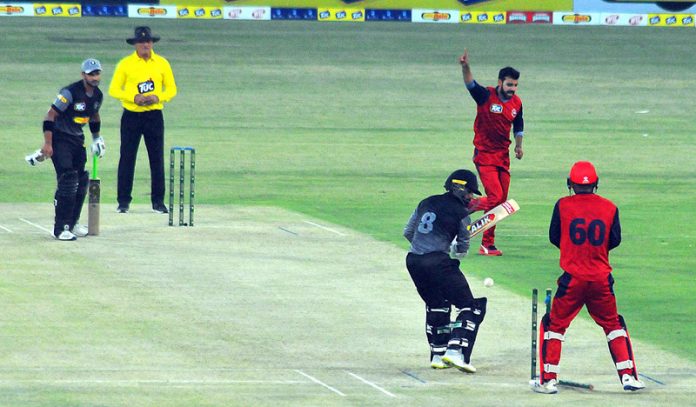 Broadcast coverage will start at 2.45pm, with the first ball in the PKR9million tournament to be bowled at 3pm. The second match of the day will get underway at 7.30pm.

The PCB as part of its commitment to its cricket fans and followers, will produce live pictures in High Definition, which will be relayed in TV lounges by PTV Sports.

As part of improving its coverage and promotion of domestic cricket, the PCB will produce the tournament through 14 High Definition cameras, including eight manned and six unmanned cameras, while enhanced international standard graphics will further improve the viewers’ experiences and bring them closer to live action. Last year, the season was covered with 12 cameras.

Besides the famed trio of Bazid, Ramiz and Wasim, Pakistan men’s national Test team captain Azhar Ali will also be a part of the commentary panel following a successful stint as an expert and analyst during the HBL Pakistan Super League 2020.

Former Pakistan women’s national team captain and one of the most celebrated and globally recognised women cricketer, Sana Mir, will also be a member of the distinguished panel. She will be accompanied in the commentators’ box by fellow women cricketer Marina Iqbal.

Renowned TV presenter Zainab Abbas will present for eight days, while Sawera Pasha will host the pre- and post-match shows.

Tariq Saeed will lead the panel of Urdu commentators as the PCB has fulfilled its fans’ demand and expectations to provide insight in the local language through specialist commentators.

Noted commentator and presenter Sikander Bakht, and first-class cricketer Shehzar Mohammad will also be part of the commentary team.

Ramiz will be part of the panel on the opening two days and would then return for the semi-finals and final that will be staged in Rawalpindi, while Wasim will be available for the weekend games in Rawalpindi on 9, 10 and 11 October. Bazid will be calling the entire Multan-leg.

Azhar Ali said , “I am really excited to commentate on the National T20 Cup following the wonderful experience I had at the HBL Pakistan Super League 2020. This tournament is set to capture the imagination of cricket fans across the country with the great pool of players available in the shape of country’s top T20 talent.

“It is also an opportunity for me to have a close look at some of the emerging and U19 players who are featuring in the tournament as the instant nature of the format makes it a big test of temperament for the young and upcoming players.”

Bazid Khan said : “The National T20 Cup promises to be a scintillating event and it’s heartening to see that efforts are being put in to promote quality cricket. I look forward to calling the action this season and I hope that the Pakistani fans will enjoy our coverage.”
Ramiz Raja said : “The National T20 Cup couldn’t have come at a better time for all of us. We have all had to sit back due to Covid-19 but cricket is making a proper comeback through this exciting tournament where Pakistan’s top talent will be on display.

“I am also looking forward to being a part of the commentary panel for our domestic cricket where we will contribute to further elevate this exciting product that carries immense potential to grow and succeed.”

Sana Mir said : “and I have experienced cricket in the backyard, on the streets, at grounds and at international level and also from the studios lately. Now this will be the first time for me to experience it from the commentary box. I hope it is a bit easier compared to being on the ground and I am totally looking forward to it.”

Wasim Akram said : “I am very excited to be a part of the broadcast team for the National T20 Cup. We are all right behind this new domestic structure and I am sure it will be a great viewing experience for all the fans.”

Zainab Abbas said : “I’m really looking forward to the National T20 Cup and its regional rivalries. It feels good to be part of the broadcasting panel and I am glad that steps are being taken to improve the quality of production.

Multan and Rawalpindi are both excellent venues and we will get to see quality cricket in an action-packed event.”