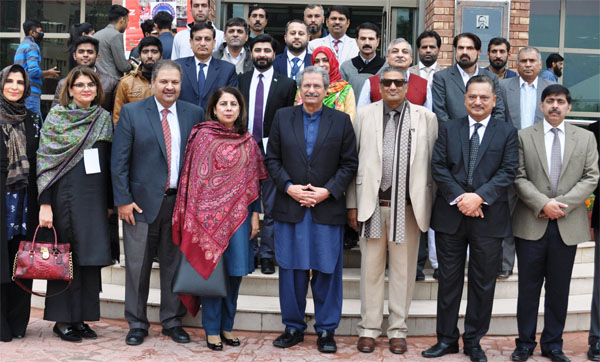 He was addressing the International Conference and Exhibition on aesthetic encounter between traditions and modernity in Pakistani art and culture. The conference is part of a 10-day long series of activities being organised as part of Islamabad Art Festival 2019.

Shafqat Mahmood said that the university under its able leadership of Prof Raheel Qamar had become a hub of arts and literary activities.

He stressed the need to highlight the importance of arts and culture of Pakistan and preserve the rich historic and cultural heritage of the country.

The minister said that the government had given immense importance to the preservation of the Kalaash Civilization and was actively engaged with UNESCO in preserving and passing on the heritage to the future generations.

The minister paid tributes to the Islamabad Art Festival that had gathered a large number of artists in the country.

The conference underlined and emphasized the importance and the role of universities in the development of art and culture of Pakistan.

Cultural diversity is a vital social and traditional resource that must be embraced as a unifying bond in Pakistani modern art said Prof. Dr. Raheel Qamar, Rector CUI while addressing the participants at the inaugural.

“The traditional arts are the backbone of our cultural heritage and in this constantly changing world they give distinct identity to our modern arts. The main focus of Conference, was to concentrate on building a bridge between the traditional arts and modern arts of Pakistan and highlight the importance of creating modern identity of Pakistani art based on its cultural heritage” he added.

Jamal Shah, President IAF2019, who was the keynote speaker of the conference talked about the importance of traditions and modernity and how to bring them together for a unique modern identity of Pakistan.

Later, the participants were shown exhibits prepared by local and foreign artists. The exhibits displayed works of miniature art, use of new materials and media for esthetic expression.