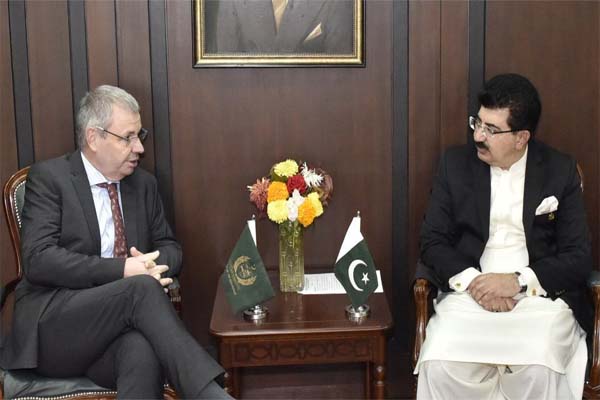 Speaking on the occasion, The Senate chairman said Pakistan valued its relations with Belgium both bilaterally as well as within the context of the European Union.

He said bilateral relations were marked by convergence of views on issues of mutual interest.

He said both sides needed to intensify dialogue for strengthening cooperation, especially in economic, trade and tourism spheres.

He said Pakistani diaspora in Belgium was contributing to the economic and social life of Belgium and could act as a bridge between the two countries.

Sanjrani said Pakistan had Parliamentary Friendship Groups with Belgium both at the Senate as well as the National Assembly. High level interactions played an important role in improving bilateral relations, he added.

He said the two countries had good Parliamentary interaction. Pakistan and Belgium had regular interaction at parliamentary level as well as visits by senators and special advisor. “We may continue this trend of parliamentary cooperation.”

He said Belgian companies were encouraged to invest in Pakistan. Belgian investors could make use of the incentives provided by the government in the field of renewable energy, tourism and the burgeoning hospitality industry of the country.

He emphasized that Pakistan had jumped 28 places in the World Bank’s ease of doing business index in 2019.

This had been achieved by streamlining and automating administrative procedures and resolving insolvency issues, he added.

He said, “The current volume of bilateral trade between the two countries is not commensurate to the true potential. Two sides may evolve strategies to give impetus to our economic relations.”

He said security situation in Pakistan had remarkable improvement which was evident from the fact that the UN had declared it a family station.

The current government was focused on increasing tourism in the country. Many reforms had been undertaken to facilitate inflow of tourists.

He said Pakistan attached great importance to our relations with Syria. He said Pakistan desired to further promote, diversify and strengthen all areas of bilateral cooperation.

Pakistan’s position on the situation in Syria was based on the principles of international law, the UN charter and the rules of inter-state conduct.

Pakistan stood for the protection of sovereignty, territorial integrity and political independence of Syria.

Ghulam Sarwar reconciles between two groups in his constituency