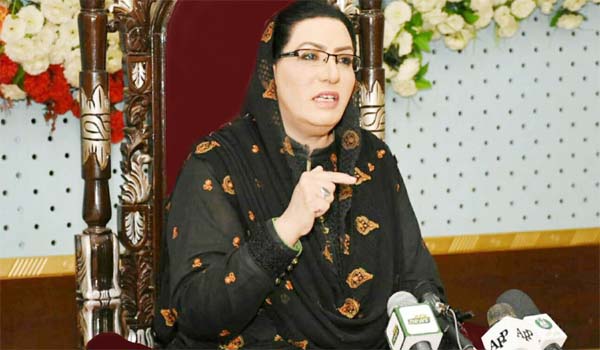 The special assistant said that the national games would soon be held in Khyber-Pakhtunkhwa (KP) after a span of nine consecutive years. She said that Pakistan’s economic indicators were getting better day by day due to which there was 13.98 percent increase in Pakistan’s national exports as well, saying that the imports of Pakistan have reduced significantly while exports also witnessed upward trajectory.

Dr Firdous said that all international monetary institutions including World Bank (WB) were also appreciating the prevailing economic system in Pakistan, saying that Pakistan’s economic indicators were getting better day by day due to effective, positive and revolutionary policies of the government. She said that Pak economy, undoubtedly, was successfully moving ahead in the right direction.

Dr Firdous Ashiq Awan said that the government was providing an ideal, conducive and protected environment to national and foreign investors. She said that several more big Chinese investors would bring investments in Pakistan during the next four years.

She said that the recent visit of the British royal couple to Pakistan showed to the world that Pakistan was a peaceful country while Pakistanis are peace-loving people.

The Special Assistant said that martyrdom of five civilians and one soldier in unprovoked Indian firing is condemnable. She said that Pakistan Army had given a befitting response to the Indian aggression. She said that armed forces of Pakistan had full capability to defend every inch of the motherland.

She said that the recent ceasefire violation by the Indian forces and targeting of civilian population in Azad Jammu and Kashmir along the Line of Control (LoC) had exposed the Indian brutalities and the UNO must take serious notice of martyrdom of civilians and Pak Army soldiers in unprovoked heavy shelling by the Indian army.

She said, “They were sabotaging the Kashmir cause for their political gains.”

She said that the government would not allow anyone to play with the lives of people and ensure its writ by protecting lives and properties of people.