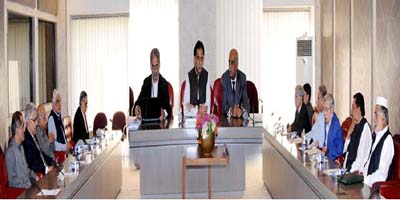 ISLAMABAD, May 25 (APP): The first meeting of Parliamentary Committee, constituted to formulate Terms of References (ToRs) on Panama Papers, was held in the presence of Speaker National Assembly, Sardar Ayaz Sadiq here on Wednesday.

The Committee unanimously decided that proceedings of the
Committee shall be held in camera.

Copies of letter of Ministry of Law and Justice, addressed
to Supreme Court and proposed Terms of Reference (ToRs), prepared by government alongwith reply of Registrar Supreme Court, were circulated among the members.

Copies of the proposed ToRs of joint opposition were
also circulated among members of the Committee.

The Committee unanimously decided that both government
and opposition may examine and consider the said ToRs so that these may be finalized with consensus during further meetings of the Committee.

The next meeting of the Committee will be held on Thursday
(May 26) at 11:00 a.m. in Committee Room No.5, Parliament House.